Update Required To play the media you will need to either update your browser to a recent version or update your Flash plugin.
By Jill Robbins
20 May 2021


Actors Gen Hoshino and Yui Aragaki played unusual, but appealing, lovers in a well-liked Japanese TV show. Now, they are really getting married.

The couple announced their decision in a joint statement posted Wednesday on Aragaki's Instagram account. It is an example of "life imitates art," which means that life sometimes seems to be a copy of a work of art. That is amusing because we usually think of art as a copy of something in real life. 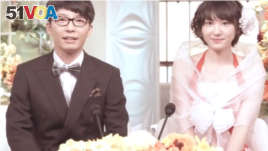 Yui Akagaki and Gen Hoshino in a television scene published May 19, 2021 on Aragaki Yui Fanspage on Instagram.

"We would like to announce that we, Gen Hoshino and Yui Aragaki, are getting married," the statement said. "We hope you will continue to warmly support us both."

Aragaki and Hoshino acted together in the 2016 humorous show, "Nigeru wa Haji da ga Yaku ni Tatsu," or "It's Shameful to Run, but It Works."

Hoshino played a businessman who hires a young woman, played by Aragaki, as a housekeeper. They begin with a business relationship. They slowly develop feelings of love for each other. They decide on an agreement that is a little like marriage, but only for three years. The story spoke to one problem in Japanese society: young people are waiting until later in life to marry and have children. The result is one of the lowest birth rates in the world.

Hoshino wrote and sang the memorable theme song, "Koi" or "Love." It was also very popular, including its dance moves. "Heartbeats throb within distance," the song goes. "Go outside the limits of man and wife."

Caroline Kennedy, who was then U.S. ambassador to Japan, had shared a video on YouTube of the embassy staff and herself doing the dance.

The show is based on a "manga" or illustrated story. It also showed the long-standing inequalities between men and women in Japan. The female character in the story has a university degree, but loses her job. With no better opportunities, she decides to work as a housekeeper. As the two become friends, they show respect for each other, without strong feelings. Slowly, they find they have fallen in love.

Hoshino is a 40-year-old, award-winning musician. He has played a lead in many movies, including 2020's "The Voice of Sin." Aragaki, age 32, started as a fashion model. She appears in Uniqlo and Toyota advertisements.

The couple has not yet said the date for their wedding.

The reaction from their followers on social media in Japan was: "Oh, wow."

In his Instagram message, Hoshino said, "We hope to work together to build a calm, happy life."

Yuri Kageyama wrote this story for the Associated Press. Jill Robbins adapted it for Learning English. Susan Shand was the editor.

couple – n. two people who are married or who have a romantic or sexual relationship

throb - v. to beat with a strong, steady rhythm

What do you think of the idea of ‘contract marriage?' We want to hear from you. Write to us in the Comments Section.