Update Required To play the media you will need to either update your browser to a recent version or update your Flash plugin.
By Gregory Stachel
21 July 2022


Annie England Noblin is 40 years old and lives in rural Missouri. She has never had a problem getting her medication methotrexate -- until last week.

Noblin takes methotrexate to treat a condition called rheumatoid arthritis. When taken in high amounts, the medicine can cause an abortion, or the end of a pregnancy.

Last week, Noblin's pharmacist said she needed confirmation from her doctor that the drug was not going to be used to cause an abortion. 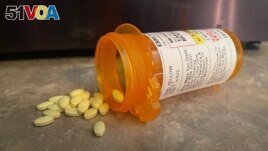 The state of Missouri now bans almost all abortions. Methotrexate can be used to end a pregnancy. But it is also one of the leading medicines doctors prescribe to treat rheumatoid arthritis, which affects more than one million Americans.

In the end, the pharmacy filled the prescription. But Noblin said she wants to change to a different, more costly medication in case the pharmacy refuses to fill her prescription in the future.

"It made me feel I couldn't be trusted with the medication prescribed to me simply because I have a uterus," Noblin said.

More than 30 states have enacted legislation that restricts the ability to get medication that can be used to end a pregnancy.

Today, women in Missouri and other states including Texas, Alabama, Georgia, South Carolina, and Tennessee have problems getting methotrexate. Some have faced difficulties getting the medicine from pharmacies. Others say their doctors simply stopped prescribing the drug. That information comes from social media posts examined by Reuters reporters and the support groups Global Healthy Living Foundation and the Arthritis Foundation.

Rachel Rebouche is a law professor at Temple University in Philadelphia, Pennsylvania. She said such laws have a "chilling effect" on doctors and pharmacists. The laws often lead care providers to not give out medications that can cause an abortion because they fear legal punishment.

The government's guidance shows the possible effects across the country in limiting such prescriptions. But the federal guidance may not be enough to deal with concerns about state bans.

Rebouche said, "We'll have to wait and see what the federal government is willing to do to ensure people have the information they need."

The National Community Pharmacists Association represents 19,000 independent pharmacists. It said in a statement that pharmacists are caught in the "crossfire" between conflicting federal and state laws.

CVS and Walgreen Boots Alliance are two of the biggest U.S. pharmacy companies. Representatives for both said they tell their pharmacists to confirm methotrexate will not be used to end a pregnancy before giving it to people in states with strict abortion laws.

Methotrexate is a low-cost drug. It is commonly prescribed to treat diseases like lupus. It has been approved to treat rheumatoid arthritis for more than 30 years.

It is also used to treat cancer. In much higher amounts, it can end a pregnancy, complete miscarriage, or end a life-threatening form of pregnancy called an ectopic pregnancy.

Pharmaceutical market research company IQVIA found that about 500,000 methotrexate prescriptions a month were written in the past year.

pharmacy – n. a store or part of a store in which drugs and medicines are prepared and sold

uterus – n. the organ in women and some female animals in which babies develop before birth

ensure – v. to make sure that something happens

crossfire – n. shots that come from two or more places so that the bullets cross through the same area — sometimes used figuratively

miscarriage – n. a condition in which a pregnancy ends too early and does not result in the birth of a live baby