Update Required To play the media you will need to either update your browser to a recent version or update your Flash plugin.
By Shelley Gollust
07 July, 2012

SHIRLEY GRIFFITH: You may have heard the old traditional American songs "Oh! Susanna," "Camptown Races" and "My Old Kentucky Home. " But, do you know who wrote them? Stephen Foster. He wrote those and more than two hundred other songs during the eighteen forties and eighteen fifties. 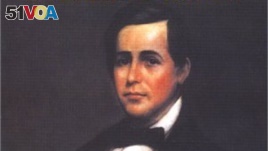 STEVE EMBER: Stephen Collins Foster was born on July fourth, eighteen twenty-six in what is now part of the city of Pittsburgh, in the northeastern state of Pennsylvania. He was the ninth child of William and Eliza Foster. He did not have much musical training. But he had a great natural ability for music. He taught himself to play several musical instruments. He could play any music just by listening to it.

Stephen Foster began writing songs when he was fourteen. In eighteen forty-seven, he wrote his first successful song, "Oh! Susanna. "

Ken Emerson wrote a book about Stephen Foster. It is called "Doo-dah! Stephen Foster and the Rise of American Popular Culture. " Mister Emerson says "Oh! Susanna" was the first internationally popular song written by an American that everyone can still recognize and sing today.

SHIRLEY GRIFFITH: Stephen Foster married Jane McDowell in eighteen fifty. He wrote many new songs. Some of them were about love. One of the best known is "Jeanie With the Light Brown Hair. " He wrote it for his wife when they were separated.

SHIRLEY GRIFFITH: Minstrel songs described the culture of black American slaves in the southern states. Yet Foster did not really know anything about this subject. He lived in Pittsburgh for most of his life. He visited the South only once.

However, some experts say Foster's minstrel songs showed he did understand how black people in the South lived before the Civil War. The people in Foster's songs love their families and work hard. Now, however, some of his songs are judged insulting to African-Americans. So, music publishers have changed some of the words. And a few of his songs are no longer sung.

STEVE EMBER: In eighteen fifty, Foster made an agreement with the leader of a successful minstrel group, E. P. Christy. The agreement meant that Christy's Minstrels had the right to perform every new song Foster wrote. Foster also permitted Christy to name himself as the writer of the song "Old Folks at Home. " This became one of most successful songs written by Stephen Foster. It became the official song of the state of Florida in nineteen thirty-five. It also is known as "Way Down upon the Swanee River."

SHIRLEY GRIFFITH: Stephen Foster wrote other songs about home and memories of times past. In his book, Ken Emerson says Foster wrote songs about home in part because he almost never lived in one home for long. His father lost all his money when Stephen was a boy. So Stephen was forced to live with many different family members. Although Foster lived in the North, some of his songs suggest a desire to be back home in the American South.

SHIRLEY GRIFFITH: Stephen Foster was America's first full-time professional songwriter. He was a good songwriter. But he was a poor businessman. He sold many of his most famous songs for very little money. He was not able to support his wife and daughter.

In eighteen sixty, he moved to New York City. His songs were not as popular as they had been. His marriage had ended. He had no money. For most of his life, he drank large amounts of alcohol. He died on January thirteenth, eighteen sixty-four. He was only thirty-seven years old.

STEVE EMBER: Stephen Foster was honored in several ways after his death. He was the first musician to be nominated to the Hall of Fame for great Americans. And he was the first American composer whose complete works were published together. Each year, on the anniversary of his death, people in Pittsburgh gather to remember Stephen Foster. They go to the church he attended as a child. They attend a show that honors him. Then they visit his burial place.

The end of Stephen Foster's life was sad. But his songs have brought happiness to many people. One of his last songs was one of the most beautiful. It is called "Beautiful Dreamer."

SHIRLEY GRIFFITH: This Special English program was written by Shelley Gollust. It was produced by Lawan Davis. I'm Shirley Griffith.

STEVE EMBER: And I'm Steve Ember. Join us again next week for another People in America program on the Voice of America.
Related Articles
go top