Former Trump Advisor Seeks to Create a School for Populists

Update Required To play the media you will need to either update your browser to a recent version or update your Flash plugin.
By Kelly Jean Kelly
12 June, 2019


A former advisor to U.S. President Donald Trump is planning to open a school for populist activists. Steve Bannon wants to set up the training center at a monastery in Italy. However, the Italian government is now seeking to stop the plan.

Bannon's idea is to teach students how to defend the West's Judeo-Christian traditions against opposition from the political left. When he announced the plan, Bannon called it a "gladiator school" – in other words, a school for warriors.

Helping Bannon is Benjamin Harnwell of Britain. Harnwell told VOA, "We are going to rip out everything of a person that is of this world and throw it away."

The goal is to turn students into single-minded activists, he added. 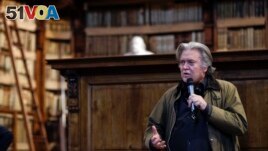 To house their school, Harnwell and Bannon have secured temporary ownership of the 800-year-old Trisulti Charterhouse. The monastery is in the mountains about 70 kilometers east of Rome. The picturesque grounds are difficult to reach, and the area does not have good internet connection.

However, said Harnwell, "It is perfect for what we want to do."

The training camp has fueled arguments among Italians. Government officials say they plan to cancel the agreement to let Bannon and Harnwell's group take control of the monastery. They say the group has violated some terms of the agreement.

Harnwell said false charges and criticism from the left influenced the government's decision. He said he plans to fight it and clear his group's name.

The officials' decision follows a number of anti-Bannon protests near the grounds of the monastery. Activists accused Bannon of being a white supremacist and a secret fascist.

Chiarina Ianni is a lawyer who has been helping to organize the protests. She told reporters that Bannon's plans are in opposition to the "spirit of this monastery, which has long been a route of peace for pilgrims and walkers."

Italians who live near the monastery seem surprised by all the attention the area is getting. Historically, the monastery has been a home for monks who mostly remained silent. Now, it is at the center of a noisy dispute.

VOA spoke to the owner of a local drinking establishment. She said, "Most of us don't like Bannon's politics. But if they get going, then it would mean jobs for locals."

And, she added, if officials force Bannon out, the monastery may become just another old building the state cannot afford to maintain.

Jamie Dettmer wrote this story for VOA. Kelly Jean Kelly adapted it for Learning English. George Grow was the editor.

monastery - n. a place where monks live and work together

supremacist - n. a person who believes that one group of people is better than all other groups and should have control over them

fascist - n. a way of organizing a society in which a government ruled by a dictator controls the lives of the people and in which people are not allowed to disagree with the government

pilgrim - n. someone who travels to a holy place