Update Required To play the media you will need to either update your browser to a recent version or update your Flash plugin.
By Dan Friedell
18 November 2022


Will you be watching the World Cup when it begins November 20 with the game between Ecuador and host country Qatar?

The soccer tournament is normally played in the summer, but this year it will start in the late autumn and finish in winter. That is due to very high temperatures in the Middle East in the summer.

If you like to watch the World Cup but do not watch world soccer all year long, here are some of the major stories to follow. 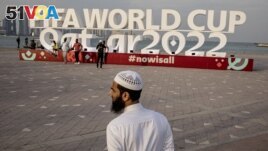 Here's how it works. The 32 teams are placed into eight groups of four. The teams in each group play each other once. Those with the best records move into a 16-team elimination stage. At that point, teams will go home if they lose.

Most days will have four games -- until the elimination stage begins. The first day with no games is December 7. The final game is December 18.

Which country will come out on top?

The top teams in the world are Brazil, Belgium, Argentina, France and England.

France is trying to win for the second time in a row. Brazil is looking for its sixth championship. Argentina has not lost in 35 games and would like to win one World Cup before Lionel Messi stops playing the sport. England has not played well lately, going winless in six games. But England has done well in recent international events like the European Championship.

Belgium is the second-ranked team in the world and has been considered one of the top teams in recent World Cups. However, the Belgian players who were known as "the golden generation" are getting older. The health of Romelo Lukaku, one of the team's top goal scorers, is in question.

Brazil has two strong players, Neymar and Vinicius Junior, and is currently in good shape. The South American nation is hoping for its first World Cup since 2002.

Cristiano Ronaldo of Portugal is one of the most famous players in the world. He helped his country win the European Championship and has the most-ever goals in international games. However, he has never come close to winning the World Cup, and this will be his fifth try. He is also near the end of his career, so this may the last time he will play in the big tournament.

Kylian Mbappe became famous four years ago when he helped France win the World Cup at just 19 years old. He is even better now. If France wins, Mbappe will match Brazilian star Pele in winning his first two World Cups.

South Korea is concerned about the health of its top player, Heung-min Son. He is coming back from a facial injury suffered while playing with England's Tottenham Hotspur on November 1. Last year, Son tied with Mohammed Salah of Egypt for the most goals in the English Premier League. Son recently said he would play in Qatar with a protective face covering.

Neymar of Brazil is sometimes outshined by Messi and Mbappe, who play with him in Paris. But he is the number-one player for his home country.

Qatar plays against Ecuador on Sunday, November 20. The first game of a World Cup is always important.

Argentina plays Mexico on November 26. A win would likely put Argentina into the elimination stage.

On November 27, Spain and Germany play. They are two of the recent World Cup winners and experts call them "giants" of world soccer.

Two days later, on November 29, the United States plays Iran. The countries will meet in the group stage, just as they did in 1998. Some are calling it "The Mother of All Games Part II," as the countries continue to have a difficult relationship after ending diplomatic ties in 1980.

Dan Friedell adapted this story for VOA Learning English based on a report by Steve Douglas of the Associated Press.

host –n. an organization (in this case, a country) that provides the things that are needed for an event

tournament –n. a sports competition where a number of games are played in order to determine a winner

elimination –n. the process of removing something

rank –v. to place something in an order