Update Required To play the media you will need to either update your browser to a recent version or update your Flash plugin.
By Pete Musto
13 May, 2018

The island is a place where New Yorkers who have little money when they die have been buried for 150 years. Now, skulls and other bones mark the ground of small piece of land. 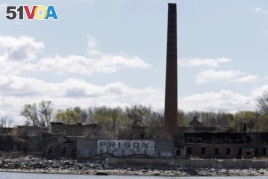 An old building shows a warning sign on Hart Island in New York.

Pictures of the remains have appeared in news reports for years. So in late April, forensic anthropologists from the city medical examiner's office visited the island.

They collected 174 human bones, which they carefully examined and recorded. Their finds included six skulls, 31 leg bones and many other bones from the head and body. Small red flags marked places along the rocky waterline where remains were found.

Carol DiMedio's grandfather, Luigi Roma, was buried on the island. He died of tuberculosis in 1933. DiMedio told the Associated Press, "When I hear about the erosion, I always think, ‘Are the bones his? Could any of them be his?'"

Activists say the bones are a sign that the island has needed improvements for a long time. The United States federal government started a $13.2 million project to repair the erosion that Superstorm Sandy and other storms caused in 2012.

But activists want the government to increase the efforts of that project. They also want Hart Island to be turned into a park and historic location, even as it continues to be used as a burial ground.

New York City Council member Mark Levine argues that the people buried there should be respected.

"These are New Yorkers," he said. "These are human beings who were largely marginalized and forgotten in life, they were people who died homeless or destitute...And we're victimizing them again in their final resting place."

About 1 million people are buried on Hart Island. New York City bought the island in 1868. It went on to use the land for a workhouse for troubled young men and a burial place for the poor. Over the years, Hart Island has housed a Civil War prison, an asylum, a tuberculosis hospital, a jail and a missile base.

All the while, New York continued shipping bodies there that went unclaimed at the city morgue. The Department of Corrections, the city's prison system, has run the island for more than 100 years. But the land has never been kept in as good condition as a traditional burial ground.

Prisoners dig long holes. Adults go in the ground in wooden boxes, placed on top of one another. Babies are placed in small containers.

Around 1,000 people are buried there each year.

The burials take place in private. Admittance to the island is limited to monthly boat trips that must be requested ahead of time. Only people with loved ones buried on the island are permitted to visit the graves. Others are restricted to a visitors' area close to where boats arrive.

In 2012, Superstorm Sandy's floodwaters washed away an embankment, which revealed a water storage system dating back to the American Civil War.

More recent storms have also eroded the island. Federal work to repair the erosion is set to begin in 2020. Until then, city officials say, an archaeologist will visit at least once a month to remove and bury remains that have been uncovered.

Revealed remains have been a problem before. A March 1985 report by the city's sanitation department found bones spread across the island, including a skull on the beach.

Melinda Hunt is an activist and the creator of the Hart Island Project. She has been recording conditions on the island since 1991. On a recent boat trip around the island, she noted the places along its northern side where bones could be seen.

"They came to clean this up, but it isn't the first time and it won't be the last," said Hunt.

Carol DiMedio said she wishes the uncovered bones would be tested for DNA evidence in order to help other families find loved ones. She had done research since she was young to try to find out where her grandfather was buried. When she finally found the answer, she did not want to tell her sick, aging mother where her father had been laid to rest.

"When I found him...I lied and I said he was buried in a beautiful place, with blue water and blue skies and lots of trees and green grass," DiMedio said. "I didn't have the heart to tell her there's this grim place called Hart Island."

Collen Long reported this story for the Associated Press. Pete Musto adapted it for VOA Learning English. Ashley Thompson was the editor.

We want to hear from you. What efforts do think we as a society should take to respect and protect the memories of everyone who dies, no matter how much money they had? Write to us in the Comments Section or on 51VOA.COM.

forensic anthropologist – n. a researcher whose job is the examination of human skeletal remains for law enforcement agencies to determine the identity of unidentified bones

erosion – n. the gradual destruction of something by natural forces such as water, wind, or ice

marginalized – adj. someone who is put or kept in a powerless or unimportant position within a society or group

morgue – n. a place where the bodies of dead people are kept until they are buried or cremated

embankment – n. a raised bank or wall that is built to carry a roadway or hold back water

sanitation – n. the process of keeping places free from dirt, infection, and disease by removing waste, trash and garbage, by cleaning streets

grim – adj. unpleasant or shocking to see or think about