The Story of an Eyewitness by Jack London

More than three thousand people are known to have died. The true number of dead will never be known. Two hundred fifty thousand people lost their homes. Just a few hours after the terrible earthquake, a magazine named Collier's sent a telegraph message to the famous American writer Jack London. They asked Mr. London to go to San Francisco and report about what he saw.

He arrived in the city only a few hours after the earthquake. The report he wrote is called, "The Story of an Eyewitness."

Not in history has a modern city been so completely destroyed. San Francisco is gone. Nothing remains of it but memories and a few homes that were near the edge of the city. Its industrial area is gone. Its business area is gone. Its social and living areas are gone. The factories, great stores and newspaper buildings, the hotels and the huge homes of the very rich, are all gone.

Within minutes of the earthquake the fires began. Within an hour a huge tower of smoke caused by the fires could be seen a hundred miles away. And for three days and nights this huge fire moved in the sky, reddening the sun, darkening the day and filling the land with smoke.

There was no opposing the flames. There was no organization, no communication. The earthquake had smashed all of the modern inventions of a twentieth century city. The streets were broken and filled with pieces of fallen walls. The telephone and telegraph systems were broken. And the great water pipes had burst. All inventions and safety plans of man had been destroyed by thirty seconds of movement by the earth. 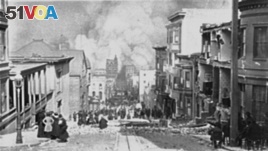 By Wednesday afternoon, only twelve hours after the earthquake, half the heart of the city was gone. I watched the huge fire. It was very calm. There was no wind. Yet from every side, wind was pouring in upon the city. East, west, north and south, strong winds were blowing upon the dying city.

The heated air made a huge wind that pulled air into the fire, rising into the atmosphere. Day and night the calm continued, and yet, near the flames, the wind was often as strong as a storm.

There was no water to fight the fire. Fire fighters decided to use explosives to destroy buildings in its path. They hoped this would create a block to slow or stop the fire. Building after building was destroyed. And still the great fires continued. Jack London told how people tried to save some of their possessions from the fire.

Wednesday night the whole city crashed and roared into ruin, yet the city was quiet. There were no crowds. There was no shouting and yelling. There was no disorder. I passed Wednesday night in the path of the fire and in all those terrible hours I saw not one woman who cried, not one man who was excited, not one person who caused trouble.

Throughout the night, tens of thousands of homeless ones fled the fire. Some were wrapped in blankets. Others carried bedding and dear household treasures.

Many of the poor left their homes with everything they could carry. Many of their loads were extremely heavy. Throughout the night they dropped items they could no longer hold. They left on the street clothing and treasures they had carried for miles.

Many carried large boxes called trunks. They held onto these the longest. It was a hard night and the hills of San Francisco are steep. And up these hills, mile after mile, were the trunks dragged. Many a strong man broke his heart that night.

Before the march of the fire were soldiers. Their job was to keep the people moving away from the fire. The extremely tired people would arise and struggle up the steep hills, pausing from weakness every five or ten feet. Often, after reaching the top of a heart-breaking hill, they would find the fire was moving at them from a different direction.

After working hour after hour through the night to save part of their lives, thousands were forced to leave their trunks and flee.

At night I walked down through the very heart of the city. I walked through mile after mile of beautiful buildings. Here was no fire. All was in perfect order. The police patrolled the streets. And yet it was all doomed, all of it. There was no water. The explosives were almost used up. And two huge fires were coming toward this part of the city from different directions.

Four hours later I walked through this same part of the city. Everything still stood as before. And yet there was a change. A rain of ashes was falling. The police had been withdrawn. There were no firemen, no fire engines, and no men using explosives. I stood at the corner of Kearney and Market Streets in the very heart of San Francisco. Nothing could be done. Nothing could be saved. The surrender was complete.

It was impossible to guess where the fire would move next. In the early evening I passed through Union Square. It was packed with refugees. Thousands of them had gone to bed on the grass. Government tents had been set up, food was being cooked and the refugees were lining up for free meals.

Late that night I passed Union Square again. Three sides of the Square were in flames. The Square, with mountains of trunks, was deserted. The troops, refugees and all had retreated.

The next morning I sat in front of a home on San Francisco's famous Nob Hill. With me sat Japanese, Italians, Chinese and Negroes. All about were the huge homes of the very rich. To the east and south of us were advancing two huge walls of fire.

I went inside one house and talked to the owner. He smiled and said the earthquake had destroyed everything he owned. All he had left was his beautiful house. He looked at me and said, "The fire will be here in fifteen minutes."

Outside the house the troops were falling back and forcing the refugees ahead of them. From every side came the roaring of flames, the crashing of walls and the sound of explosives.

Day was trying to dawn through the heavy smoke. A sickly light was creeping over the face of things. When the sun broke through the smoke it was blood-red and small. The smoke changed color from red to rose to purple. 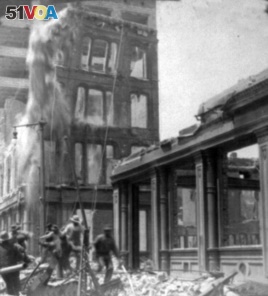 Pulling Down the Walls of Great Business Buildings

I walked past the broken dome of the City Hall building. This part of the city was already a waste of smoking ruins. Here and there through the smoke came a few men and women. It was like the meeting of a few survivors the day after the world ended.

In the end, the fire went out by itself because there was nothing left to burn. Jack London finishes his story:

All day Thursday and all Thursday night, all day Friday and Friday night, the flames raged on. Friday night saw the huge fires finally conquered, but not before the fires had swept three-quarters of a mile of docks and store houses at the waterfront. 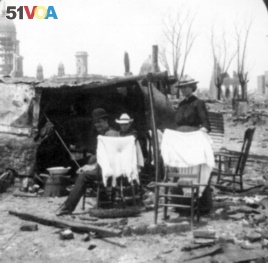 A Temporary Home Near the City Hall

San Francisco at the present time is like the center of a volcano. Around this volcano are tens of thousands of refugees. All the surrounding cities and towns are jammed with the homeless ones. The refugees were carried free by the railroads to any place they wished to go. It is said that more than one hundred thousand people have left the peninsula on which San Francisco stood. 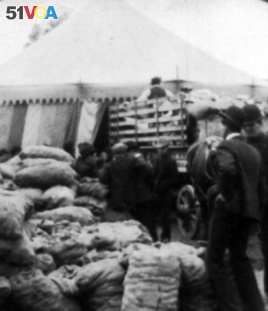 The government has control of the situation, and thanks to the immediate relief given by the whole United States, there is no lack of food. The bankers and businessmen have already begun making the necessary plans to rebuild this once beautiful city of San Francisco.

"The Story of an Eyewitness" was written by Jack London and adapted by Paul Thompson. It was published in Collier's Magazine, May 5, 1906. Your narrator was Doug Johnson.

smash - v. to break into many pieces; to shatter or destroy

atmosphere - n. the whole mass of air that surrounds the Earth

surrender - v. to agree to stop fighting, hiding, resisting, etc., because you know that you will not win or succeed

retreat - v. to move or go away from a place or situation especially because it is dangerous, unpleasant, etc.

survivor - n. a member of a group who continues to live after other members have died

firestorm - n. a very large fire that destroys everything in its path and produces powerful winds