Update Required To play the media you will need to either update your browser to a recent version or update your Flash plugin.
By VOA
03 February, 2016


The new movie, "The Birth of a Nation," was a long time in creation.

Nate Parker stars in and directed the movie. But he also wrote the screenplay and it took him seven years.

The film created a buzz at the Sundance Film Festival in Park City, Utah. It tells the story of Nat Turner, a slave who grew up to lead a rebellion in the state of Virginia in 1831. 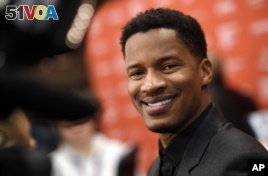 Nate Parker, the director, star and producer of "The Birth of a Nation," poses at the premiere of the film at the 2016 Sundance Film Festival in Park City, Utah, Jan. 25, 2016. (Photo by Chris Pizzello/Invision/AP)

As a child, Nat Turner learns to read and becomes a religious leader in Virginia. His owners think his preaching will lead other slaves to become more obedient. So they send Turner to nearby farms to preach to the slaves. But instead Turner urges them to rebel against their owners. The rebellion left 60 slave owners and hundreds of slaves dead.

Nate Parker said the film looks at the roots of issues that African-Americans still have to deal with.

"My job as a filmmaker is to create content, to seek out material, to develop material that I think will help be progressive and deal with some of the systemic issues that we are dealing with."

Armie Hammer plays Nat Turner's owner, Samuel Turner. He said that Nate Parker ran the movie set like a long-time director. Yet it was his first film as director.

"He (Parker) walked on the set with the confidence and skill and ability of someone who has directed 50 movies before."

The Sundance Film Festival honored The Birth of a Nation with the grand jury prize and the audience award for American dramatic productions.

The film has the same name as a famously racist 1915 movie by D.W. Griffith. That movie showed the white extremist Ku Klux Klan in a good light, while African Americans were shown as immoral and dangerous.

Nate Parker told vulture.com that it was "critical" he use the same title. He said the earlier "Birth of a Nation" persuaded millions of Americans that for their survival "they needed to oppress an entire people." Parker said, now "Birth of a Nation" honors Nat Turner. He describes the rebel leader as one of the bravest revolutionaries in U.S. history.

Hollywood has been criticized for the lack of black actors among Academy Award nominees for the second year. Parker said the Oscars issue is just a sign of a much wider problem.

"I think the sickness is the fact that there is a level of racism that exists not only in society, obviously, but in Hollywood. The legacy of slavery and the legacy of the injury that we've endured. We want to be a change factor with this film."

Birth of a Nation co-star Armie Hammer said Parker's interest in the movie carried the cast and crew members through some difficult filming.

"The Birth of a Nation" was shot in 27 days for about $10 million. Fox Searchlight Pictures has paid $17.5 million for the rights to the film. That is a near record for film festival deals.

We want to hear from you. Post your message in the Comments Section or on 51voa.com.

In this video, Nate Parker talks about "The Birth of a Nation."

preach – v. to make a speech about religion in a church or other public place: to deliver a sermon

title – n. the name given to something (such as a book, song, or movie)

passion – n. a strong feeling of enthusiasm or excitement for something or about doing something

unwavering – adj. continuing in a strong and steady way