Storyteller Reaching Out to Children in Mexico

Update Required To play the media you will need to either update your browser to a recent version or update your Flash plugin.
By John Russell
24 July 2020


Percibald Garcia knew that staying at home during the coronavirus lockdown is especially difficult for children. So, the 27-year-old architect decided to read them stories.

Almost every day since the beginning of May, Garcia can be seen in Mexico City with his "wandering microphone." With it, he broadcasts stories to children who gather at apartment building windows to listen.

While many children today have cellphones or computers, Garcia wants them to hear the human voice. He also wants them to realize they can use, even from a distance, the public plazas that have been an important part of Mexican life for hundreds of years. 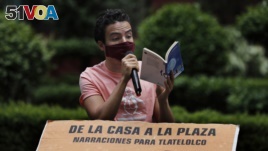 "We realized that almost nobody was looking after the way that kids were experiencing this lockdown," Garcia said recently.

Setting up in one of the green spaces near apartment buildings, he read "The Crazy Opossum," by David Martín del Campo. It tells the story of a possum who suffers because he is so short. The possum tries to reach the moon to feel taller. Once there, he eats the moon — and then must decide, with other animals, how to bring it back.

Before reading a story, Garcia often plays music by the Mexican composer Francisco Gabilondo Soler, known for his children's songs.

Sometimes other storytellers perform, as does a puppet troop. And always, children appear at the windows of the apartment building to listen to the show.

"In the last three months, everything has gone online, — work, contacts, shopping," said Garcia. He added that he thinks of his work as an "act of resistance" against technology moving into every part of human life.

Rogelio Morales listened to the stories from the window of his grandmother's home. Since March, the 9-year-old has spent much of his time playing video games.

"It's nice," Rogelio said of the storytelling. "If we have something to do, or if we're very frustrated, we can relax a little."

Luna Gonzalez came with her mother, Tatiana Vega, to listen to the stories from a safe distance. They both wore face masks.

"I imagine the characters, I imagine what the animals are like," said Luna. "Sometimes we go out, because I get bored at home."

Garcia calls his project "De la Casa a la Plaza." In English, that means "From the house to the plaza."

"The public plaza has been extremely important in Mexico since the time of our ancestors," Garcia noted. "It is where people meet, talk, where the life of a neighborhood develops."

Some children have even asked Garcia to read their own stories. Other people have been invited to read stories too.

"This is an invitation to people to continue using the public plaza," he said.

It is not only children who listen.

"This young man will get a special reward from God, because it is not just children he is entertaining, it is people of my age, too," she said.

Lissette Romero reported on this story for the Associated Press. John Russell adapted his report for VOA Learning English. George Grow was the editor.

lockdown – n. use of restrictions as a security measure

wander – v. to move around or go to different places usually without having a given purpose or direction

plaza – n. a public space or open space in a build-up area

puppet – n. a movable model of an animal or person

shopping – n. the action of buying goods from stores

frustrate – v. to cause (someone) to feel angry because of not being able to do something