Update Required To play the media you will need to either update your browser to a recent version or update your Flash plugin.
By Gregory Stachel
09 February 2022

The 94th Academy Awards, also called the Oscars, will take place on March 27. The awards, presented by the Academy of Motion Pictures Arts and Sciences, celebrate and recognize the best efforts and success in the film industry. 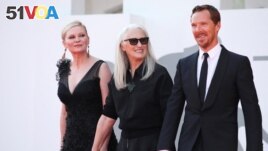 FILE PHOTO- Director Jane Campion with actors Benedict Cumberbatch and Kirsten Dunst at the 78th Venice Film Festival for the film 'The Power of the Dog' in Venice, Italy on September 2, 2021. (REUTERS/Yara Nardi/File)

The Netflix film The Power of the Dog leads all movies this year with 12 nominations. The streaming service also earned 27 nominations overall.

The movie received four acting nominations for Benedict Cumberbatch, Kodi Smit-McPhee, Kirsten Dunst, and Jesse Plemons. "For both Jesse and I to get our first nominations together is beyond our wildest dreams," Dunst said. Dunst and Plemons are in a relationship.

The Power of the Dog also earned a best picture nomination. If it wins, it will be the first time a film from a streaming service has won such an award.

Marc Malkin is senior culture and events editor at the publication Variety. Malkin said, "Every year we talk about how the streamers are getting more and more powerful when it comes to the Oscars." He continued to say, "This year really proves it."

The movie Dune was released in both traditional movie theaters and, for a short time, on the new streaming service HBOMax. The movie received ten nominations including best picture.

The three streaming-service releases, The Power of the Dog, CODA and Dune, will compete for the best picture against Kenneth Branagh's Belfast and Steven Spielberg's remake of West Side Story. Both films earned seven nominations each.

The Japanese-language movie Drive My Car, about a widowed theater actor, earned a surprise best picture nomination. Other contenders included King Richard, about the father of tennis greats Venus and Serena Williams, Licorice Pizza, a movie about growing up, and Don't Look Up along with Nightmare Alley.

Actors Nicole Kidman and Javier Bardem were nominated for playing Lucille Ball and Desi Arnaz in Being the Ricardos.

Kristen Stewart received her first Oscar nomination for playing Princess Diana in Spenser. She will compete with Olivia Colman in The Lost Daughter among others. Voters did not give singer Lady Gaga a nomination for her widely praised performance in House of Gucci.

Three Black actors were nominated for acting awards this year. Both Will Smith and Aunjanue Ellis received nominations for playing husband and wife in King Richard. And Denzel Washington was nominated for his work in The Tragedy of Macbeth.

Actor Ariana DeBose who is Black and Latino won a nomination for her acting in West Side Story.

After criticism over the #OscarsSoWhite movement in 2015 and 2016, the Academy of Motion Pictures Arts and Sciences has added more women and people of color as voting members. It also added members from outside the United States.

streaming – n. the continuous transmission of video files from a server to a viewer

nomination – n. the act of choosing someone or something as a candidate for receiving an honor or award

widow – n. a woman whose husband has died

contender – n. a person who tries to win something in a contest