Students Going into Debt to Pay for College

Update Required To play the media you will need to either update your browser to a recent version or update your Flash plugin.
By VOA
23 April, 2017


College students are facing more debt than ever before.

Students who graduated from college in 2015 left school with an average of $34,000 in debt, the Federal Reserve Bank reported this month.

The Federal Reserve Bank said students and their parents are taking out bigger loans than in the past. That is because state and local governments are paying a smaller percentage of the cost of higher education.

William Dudley is president and CEO of the Federal Reserve Bank in New York. He said that graduates from some colleges are having trouble finding good-paying jobs.

That is making it difficult for them to pay off their loans, he said.

Some efforts to reduce college costs

Several measures have been proposed to deal with the rising costs of college.

In New York, Governor Andrew Cuomo recently signed into law a bill that will let New Yorkers send their children to public colleges without having to pay tuition. Students from families whose yearly incomes are $125,000 or less will be eligible for free tuition.

Cuomo said 95 percent of jobs created since 2008 require at least some college education.

"So you need a college education. But at the same time, college is harder and harder to get. It is more and more expensive. You can't go to the family and say, ‘Pay the tuition.' They can't. You go and you get loans. You graduate with a mountain of debt you pay for half your life."

Sarah McCormick is a doctor in Palatine, Illinois. She wrote about her efforts to repay $400,000 in loans she took out for medical school on the website studentdebtcrisis.org.

"Many people think doctors are rich," she wrote. "I have many friends who are pinching pennies to even make it as physicians right now. Their loans are even higher than mine and some are paying up to $4,000 a month."

International students often pay full tuition to attend American colleges. They are not eligible for American tuition assistance programs, such as Pell Grants. It is difficult for international students to get loans; they need someone to promise to pay it off if the student fails to do so.

Kwadwo Poku-Agyemang is a 27-year-old graduate student from Ghana. He is getting his master's degree in business and finance at Louisiana State University (LSU).

His first year of study cost him $30,000. He saved up money before coming to LSU by working at Ghana's tax office – money he has used to pay tuition. He also got some financial help from his parents. His father is an engineer and his mom works for Ghana's government.

"Coming to America is hard, and you have to figure out a way to make it work," Poku-Agyemang said. Still, he is glad he decided to go to LSU. He says he has learned a lot. And, he says, he will only have to pay for 10 percent of his second year of Master's studies. LSU will cover the remaining tuition costs for him. 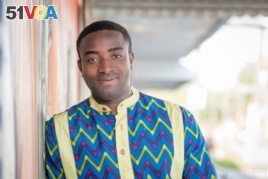 Maiko Le Lay is a PhD student in critical dance studies at the University of California at Riverside. She describes herself as "half French and half Japanese."

She said she did not have to pay for her first year in the PhD program. But after the first year, she had to pay $15,000 a year as a "nonresident of California."

"I was told everything would be free and not to worry," Le Lay said. It has been a struggle to find the $15,000 because her student visa limits her to working about 20 hours a week during the school year, she said.

A fellowship helped, and so did a job with her college's international student association. But she said she has no guarantees that the fellowship will continue.

As a candidate, Trump promised to help college students

During his successful campaign for president, Donald Trump proposed that student loan borrowers limit their monthly loan payments "based on their ability to pay."

His Education Secretary is Betsy DeVos of Michigan. In response to questions from the U.S. Senate, DeVos said "changes to the loan programs should be made carefully."

She promised to work with Congress to develop proposals.

Colleges looking for students who can pay full tuition

Parke Muth is a college admission's adviser in Charlottesville, Virginia.

In many countries, only the top one percent of wage earners would be able pay full price to send their children to American colleges.

Muth then mentioned an international student from Myanmar. Not long ago, she was living in a refugee camp without enough food. Now, he said, she has won a scholarship to attend the University of Texas next fall.

We want to hear from you. Write to us in the Comments Section and share your views on 51VOA.COM. For those who went or are planning to attend college, how did you or how will you pay for college.

afford - v. able to pay the cost of something

pinching pennies - phrase, trying not to spend any more money than necessary

fellowship - n. a financial award to study something or do research

cap - v. a limit on how much can be spent