Students Use 'One Minute Mysteries' to Solve Problems

Update Required To play the media you will need to either update your browser to a recent version or update your Flash plugin.
By Phil Dierking
13 December, 2016


Earlier this year, we reported on how some English teachers are using murder mysteries to teach English.

Today we tell about an educational series called "One Minute Mysteries." Each book in the series requires students to solve a mystery by using their knowledge of mathematics and science.

The latest additions are written in both English and Spanish. The books are targeted at schools where students are taught in both languages.

Here is an example.

Imagine this situation: A mother writes a note to her children and then leaves home for the day. The note says the children should prepare a meal for themselves. There are eggs in the home. Some are hard-boiled, while others are not. Both kinds of eggs look the same. How can the children know which is which, without breaking them open?

The students at Mundo Verde have to think scientifically to solve this mystery. One fifth grader, Samadhi, says she had to try more than one idea to recognize a difference between the eggs.

"It was kind of difficult, but it was fun too ...You get to do things yourself. You get to try new things, you don't have to do what the teacher tells you. You get to try stuff that you think might work for what you're doing."

Samadhi discovered that spinning the eggs solved the problem. Raw eggs spin more slowly than hard-boiled ones because the liquid inside slows them down. 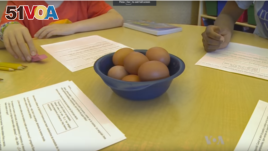 "The Eggcellent Idea", one of 65 mysteries in the series

This mystery is called, "The Eggcellent Idea." It is one of 65 mysteries in the series. Each one takes about 90 seconds to read and requires students to solve it using their math and science knowledge.

Karen Geating Rivera teaches at Mundo Verde. She notes that the mystery series was the creation of Eric Yoder and his daughter Natalie.

"When they were first written, the daughter was still a middle schooler," Rivera said. "So it's not just written for children, but it was actually written in part by the child herself."

"Every single mystery is written with characters that are children, and children that are facing real world situations and that they need to solve using their background knowledge on math or science."

"I like having the opportunity of having them in small groups, sharing their ideas, feeling out the experimentusing their hands."

To complete the mysteries, the students need to discuss the facts with each other before giving an answer. Ten-year-old Dante finds these discussions useful.

According to Rivera, bringing the mysteries into the classroom enables her students to develop several skills at the same time, and learn from each other.

"The kids who don't speak Spanish at home, and who are learning Spanish as a second, or maybe third language, are able to hear the native Spanish speakers in a natural, authentic setting and start picking up some of that language and vice versa."

According to Rivera, the fact that the students are leaving the classroom still talking about what they had done tells her that she really made it an authentic experience, something that they can walk out and continue using in real life.

Faiza Elmasry wrote this story for VOANews. Phil Dierking adapted her report for Learning English. ­­­­­George Grow was the editor.

What are other creative ways to teach science and math in the classroom? We want to hear from you. Write to us in the Comments Section or on Facebook page.

character – n. a person who appears in a story.

boil – v. to become so hot that bubbles are formed in a liquid and rise to the top

spin – v. to turn or cause something to turn around repeatedly

vice versa – adv. used to say that the opposite of a statement is also true