Study: Sahara Changed from Wet to Dry Every 20,000 Years

Update Required To play the media you will need to either update your browser to a recent version or update your Flash plugin.
By Bryan Lynn
06 January, 2019


A new study suggests climate conditions in the Sahara Desert have changed from wet to dry about every 20,000 years.

The study was carried out by scientists at America's Massachusetts Institute of Technology, or MIT. Findings were published in the journal Science Advances. The research was partly funded by the National Science Foundation.

The Sahara Desert is known as one of the hottest, driest and most desolate areas in the world. It covers about 9.3 million square kilometers across North Africa.

But previous evidence has suggested the Sahara did not always experience such extreme heat and dry conditions. The evidence included material collected from fossils and rock paintings from the area.

The evidence showed that at times, the Sahara changed to a very wet climate. This permitted plants and animals to develop and grow and led to the creation of human settlements.

Now, MIT researchers have discovered more evidence of this changing climate. The scientists examined dust gathered from the coast of West Africa over the past 240,000 years. The research showed that during that period, the Sahara's climate kept changing between wet and dry about every 20,000 years. 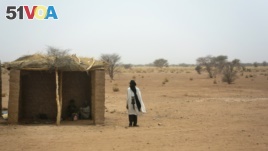 A man stands by his hut in Niger's Tenere desert region of the south central Sahara on Wednesday, May 30, 2018. (AP Photo/Jerome Delay)

David McGee is an associate professor in MIT's Department of Earth, Atmospheric and Planetary Sciences. He helped lead the study.

McGee told MIT News the new evidence supports the idea that the area's climate repeatedly kept changing over the years. "Our results suggest the story of North African climate is dominantly this 20,000-year beat, going back and forth between a green and dry Sahara," he said.

McGee and other researchers reported these back and forth climate changes were mainly driven by changes in the Earth's axis as the planet orbits the sun. This process affects the amount of sunlight between seasons. The research suggests that every 20,000 years, the Earth receives more intense summer sunlight.

When the Earth's axis changes again, the amount of sunlight is reduced. This season change happened continuously every 20,000 years, the study found. The other part of the season produced monsoon conditions, resulting in a wetter, greener, plant-rich environment. When the rainy activity weakens, the climate becomes hot and dry, like the Sahara remains today.

The scientists based their research on dust samples collected from ocean sediment. They said hundreds of millions of tons of Saharan dust had built up over hundreds of thousands of years in the Atlantic Ocean bottom off the coast of West Africa.

An examination of the dust buildup permitted the researchers to learn about the Sahara Desert's climate history. The samples contained layers of ancient sediment built up over millions of years. Each layer could contain traces of Saharan dust as well as the remains of life forms, MIT News reported.

This information was used to estimate over what time period the dust had built up. This led to the overall finding that the Saharan changes from wet to dry climates happened every 20,000 years.

Researcher David McGee told MIT News that today we only see the Sahara Desert as an extremely desolate and "inhospitable" place. The new study suggests that the area's climate has "shifted between grasslands and a much wetter environment, and back to dry climates, even over the last quarter million years."

McGee says he thinks the latest research can be valuable in studying the Sahara's history as it relates to human settlement. "What times could have been good for humans to settle the Sahara Desert and cross it to disperse out of Africa, versus times that would be inhospitable like today," he said.

Bryan Lynn wrote this story for VOA Learning English, based on a study published in Sciences Advances and a report by MIT News. Hai Do was the editor.

fossil – n. part of an animal or plant from thousands of years ago that has been preserved in rock

dominant – adj. main or most important

sediment – n. solid substance that forms a layer at the bottom of a liquid

layer – n. an amount of a substance covering a surface, with each on top of the other

inhospitable – adj. not pleasant or easy to live in because of extreme conditions

disperse – v. to separate and go in different directions