Study: Ancient Sharks Might Have Competed Against Each Other

Update Required To play the media you will need to either update your browser to a recent version or update your Flash plugin.
By Gregory Stachel
05 June 2022


Researchers are learning more about the disappearance of the largest-known shark.

Sharks are large and often dangerous sea fish known for their sharp teeth.

The international researchers studied the mineral zinc found in the teeth of both living and extinct sharks. 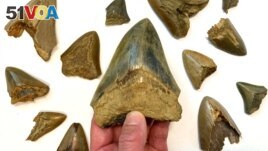 Fossil teeth of the huge extinct kind of shark megalodon - Otodus megalodon - are seen in this undated image. (Kenshu Shimada/Handout via REUTERS)

The study involved teeth from 20 living kinds of sharks and 13 extinct kinds. The research on the teeth suggested the position of these sharks in the food chain.

Researchers compared the amounts of two forms of zinc in the outer covering of the sharks' teeth. The researchers learned something about the shark's diet and their position in the food chain from the comparison.

The researchers found the megalodon was on top of the food chain for millions of years. But they found that the great white shark's arrival about 5.3 million years ago added a hunter in the same position competing for similar food.

The shark reached at least 15 meters to possibly 20 meters in length. It fed on sea mammals, a group of animals that includes whales.

The great white shark, which scientists call Carcharodon carcharias, is smaller, reaching a length of about six meters. It may have been better at swimming and hunting than Megalodon.

Kenshu Shimada is a scientist who studies extinct animals at DePaul University in Chicago, Illinois. He helped write the study which was published recently in Nature Communications.

Shimada said the two sharks lived together during a period of time called the early Pliocene. He added that the zinc data suggests they seemed to have been in the same position in the food chain.

Shimada said there are many ideas about why the megalodon went extinct. They include climate change and a decrease in food. He said a recent scientific theory is that the megalodon "lost the competition with the newly evolved great white shark."

Shimada said their study appears to support that idea. But he added that it could have been a combination of reasons.

The researchers said it is not thought that the great white actually hunted the larger shark.

Much still remains unknown about the megalodon. Sharks do not have bones but a material called cartilage. Cartilage does not fossilize well. That makes it difficult to know what megalodon looked like. However, many megalodon tooth fossils have been found around the world.

Shimada said, "the reality is that we still know very little about this extinct shark."

food chain – n. a series of types of living things in which each one uses the next lower member of the series as a source of food

evolve –v. to develop into something more complex or better over a long period of time