Study: Class Size Has Only Minor Effect on Student Results

Update Required To play the media you will need to either update your browser to a recent version or update your Flash plugin.
By Bryan Lynn
18 December, 2018


Reducing class size has traditionally been seen as an important way to improve a student's educational experience.

Many public opinion studies have shown that both teachers and parents favor smaller class sizes. Teachers who go on strike are often seeking lower classroom numbers, among other better working conditions.

Many often believe that smaller classes would permit teachers to give more personal attention to their students. This can theoretically lead to improved academic results for students.

But one recent study suggests there is not much research-based evidence to support this idea.

The research was collected by a team from Denmark's Danish Center for Social Science Research. Results were published by not-for-profit Campbell Collaboration, based in Oslo, Norway. 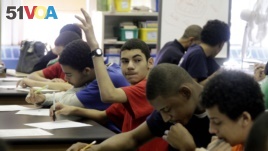 The researchers say the idea of smaller class sizes has been studied and debated for many years. However, they noted a lack of clear research to support class-size reductions.

The study notes that one of the main problems with reducing class size is that it can have very high costs. Increasing class size is one of the most common ways school systems control education spending. Financial limitations make it very difficult for many schools to reduce the number of students in the classroom.

The new study began by examining 127 studies on classroom size in grades kindergarten through 12 in schools in 41 countries.

The researchers' goal was to examine the major research studies already completed on the subject. They especially centered on studies that tried to measure whether smaller class size resulted in greater academic success for students.

The researchers did not include many of the studies they found on the subject. That is because the researchers found issues with possible sampling problems or bias. In the end, the research centered on 10 main studies. 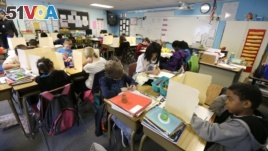 The researchers concluded that there is some evidence to suggest that reducing class size may lead to some improvement in a student's reading achievement. But they said "the effect is very small." They found just a 53-percent chance that a randomly selected test score from a student from a small class would be higher than the selected score of a student from a larger class.

For mathematics achievement, the result was 49 percent. This led the researchers to conclude that there would be no benefit at all to math students in a smaller class size.

The National Education Association, or NEA, is an American labor union that represents 3 million educators working at public schools and colleges in the United States. The organization is in favor of smaller class sizes in U.S. schools. For example, the NEA has called for a class size of 15 students in early grades of usual school programs. 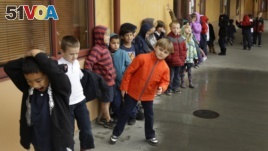 The NEA says it believes small class size does result in greater student achievement. It has pointed to research that supports this idea. One such study was completed in 2014 by Northwestern University professor Diane Whitmore Schanzenbach. The National Education Policy Center published the study.

In that study, Schanzenbach said she also carried out a major examination of available research on the subject. She said her research showed that class size is "an important determinant of student outcomes." In addition, she added: "All else being equal, increasing class sizes will harm student outcomes."

Schanzenbach said her research found evidence that increasing class size was found to directly hurt student test scores. She noted that the effects of larger class size can stay with the students long after they complete their education.

"Money saved today by increasing class sizes will result in more substantial social and educational costs in the future," she wrote.

bias – n. a strong and often unfair influence on someone or something

conclude – v. make an ending statement about something

achievement – n. something good that is achieved

randomly – adv. done or chosen without any play or system

score – n. the number of points received in a game or test

benefit – n. something that helps or provides an advantage

outcome – n. final result of a process or activity