Study: Dogs Can Recognize Heat with ‘Infrared Sensor’ in Their Nose

Update Required To play the media you will need to either update your browser to a recent version or update your Flash plugin.
By John Russell
10 March 2020


Dogs have a kind of sensor on the end of their nose that helps them recognize small changes in temperature, such as when other animals are nearby.

That information comes from scientists at Lund University in Sweden and Hungary's Eotvos Loránd University. 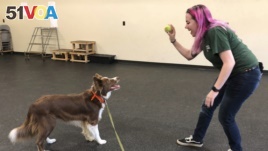 In this May 7, 2019 photo, student trainer Samantha Springstead works with Finn, a border collie at the State University of New York, Cobleskill, in Cobleskill, N.Y. (AP Photo/Mary Esch)

The scientists say the discovery can help researchers better understand how some animals identify their prey.

The findings appeared in Scientific Reports, a publication produced by Nature Research.

The scientists reported that the wet skin surface at the end of a dog's nose is full of nerve endings. It works like a kind of infrared sensor, they said.

"Dogs are able to sense the thermal radiation coming from warm bodies or weak thermal radiation and they can also direct their behavior according to this signal," said Anna Balint. She was the lead author of the published report.

"We tested whether we can find an area in the brain that shows higher activity if they are exposed to a warmer ... object," she added.

Brain imaging tests showed increased brain activity when dogs were shown objects that were warmer than their surroundings.

The other, at the Eotvos Loránd University, involved 13 dogs. They were given functional magnetic resonance imaging tests to see how the brain reacted if they recognized weak thermal radiation.

Researchers were careful to note that all the animals were privately owned. Owners gave "informed consent for their dogs to be used in the study." Among the dogs involved in the experiments were golden retrievers and border collies.

Ronald Kroger is a scientist at Lund University. He noted "it is possible that other carnivorans possess a similar infrared sense and that adds a new chapter to the story of prey-predator relationships."

The researchers wrote that in the grey wolf, the closest wild relative of domestic dogs, "the ability to detect the radiation from warm bodies would be advantageous for such predators."

Kroger added, "Predator hunting strategies have to be re-evaluated and the biology of prey animals has to be revisited with body heat sensing predators in mind."

Krisztina Fenyo and Gergely Szakacs reported on this story for Reuters. John Russell adapted their report for VOA Learning English. George Grow was the editor.

prey – n. an animal that is hunted and killed for food

consent – n. permission for something to happen or be done

carnivoran – n. a member of the family Carnivora

infrared – adj. technical: producing or using light that cannot be seen and that are longer than rays that produce red light

domestic – adj. existing or taking place inside a territory or country; not foreign or international