Study: Dogs Evolved to Use Eyes to Connect with Humans

Update Required To play the media you will need to either update your browser to a recent version or update your Flash plugin.
By Bryan Lynn
23 June, 2019


Dog lovers are well aware of the ability of a dog to communicate with its eyes. Now, scientific research suggests this ability developed over time as dogs learned to live with humans.

Just like humans, the eyes can be one of the most appealing things about dogs, the animals known in many cultures as "man's best friend."

But a new study found evidence that dogs developed in physical ways to present "puppy dog eyes" as a way to help connect with humans. Researchers in Britain and the United States did the study. Results were published in the Proceedings of the National Academy of Sciences (PNAS).

The study compared the facial muscles of dogs and wolves, which share ancestral history. Dogs broke off from wolves after being domesticated about 33,000 years ago. During that time, dogs changed physically and behaviorally to fit life with humans.

The researchers examined the heads of six dogs and two wolves for comparison. They found the facial structure of both animals was mostly very similar. But one major difference was found above the eyes. 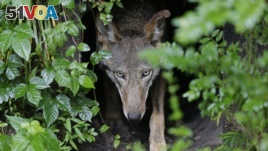 In this Monday, May 13, 2019 file photo, a female red wolf emerges from her den sheltering newborn pups at the Museum of Life and Science in Durham, N.C. (AP Photo/Gerry Broome)

The dogs were found to have two well-formed muscles around the eye that were not present in the wolves. These small muscles permit dogs to "intensely" raise their inner eyebrow, the study found.

Anne Burrows is a professor at Duquesne University in Pittsburgh, Pennsylvania. She was a lead researcher on the study. "You don't typically see such muscle differences in species that are closely related," she told the Associated Press.

Comparative psychologist Juliane Kaminski from Britain's University of Portsmouth led the research. The team suggests this eyebrow-raising movement causes "a nurturing" feeling in humans because it makes the dogs' eyes appear larger.

This expression also makes the dog look more like a human baby. The eye movement is similar to that which humans make when they are sad, the statement said. "The evidence is compelling that dogs developed a muscle to raise the inner eyebrow after they were domesticated from wolves," Kaminski said.

In a separate part of the study, the researchers observed how 27 dogs and nine wolves interacted with a human. "We also studied dogs' and wolves' behavior. And when exposed to a human for two minutes, dogs raised their inner eyebrows more and at higher intensities than wolves," Kaminski said.

The researchers suggest that the eye movements developed over time as a way for dogs to get humans to do things for them. This could involve humans giving them food, care or attention.

Brian Hare, from America's Duke University, edited the study. He called the findings "profound" for showing that these muscles likely developed to help in their interactions with people. "The proof has been in their puppy dog eyes all this time," Hare said.

The only dog species in the study that did not have the muscles was the Siberian husky, which is an ancient kind. The husky could be the best living example of what the link between dogs and wolves looked like.

Anne Burrows said the main limitation of the study was the small number of dogs and wolves used. This means further study will be required and should include other ancient dog breeds. The work could also be extended to other animals with which humans have developed close relationships, including horses and cats, Burrows said.

Bryan Lynn wrote this story for VOA Learning English, based on reports from PNAS, the University of Portsmouth, the Associated Press and Agence France-Press. Caty Weaver was the editor.

domesticate – v. to bring animals or plants under human control so that humans may use them as pets, for food or power

nurturing – n. feeding and caring for a child or someone else who needs it

expose – v. make something that was hidden able to be seen