Update Required To play the media you will need to either update your browser to a recent version or update your Flash plugin.
By Bryan Lynn
14 March 2022


A new study provides additional evidence that COVID-19 can damage parts of the brain.

The study said that even people with mild sickness can suffer brain tissue shrinkage and damage to areas that control smell.

The research was led by scientists at Britain's Oxford University. The researchers said their study provides "strong evidence" of "brain-related abnormalities in COVID-19." 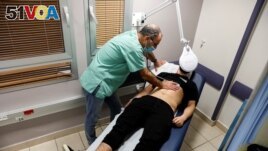 The team noted that past studies have also found links between COVID-19 and changes to the brain. But those studies centered mainly on COVID-19 patients who were hospitalized with severe sickness.

The latest study recently appeared in the publication Nature.

The team said further study is needed to find out whether the brain changes are long lasting and can be fixed.

The study involved 785 subjects in Britain between the ages of 51 and 81. All were given two brain scans to measure differences during the experiment. A total of 401 subjects were found to be infected with COVID-19 between the scans. Most of them had only minor sickness.

The researchers reported a number of brain effects in the patients. The subjects experienced the effects, on average, four-and-a-half months after infection.

The changes included "a greater reduction in gray matter thickness" after individuals were infected with COVID-19. Gray matter in the brain helps people control movement, memory and emotions. The greatest reduction was seen in areas of the brain linked to smell. In addition, some infected patients also showed "a reduction in whole brain size," the researchers reported.

On average, subjects infected with COVID-19 also showed "greater cognitive decline" linked to an area of the brain related to cognition.

Gwenaelle Douaud is a professor at Oxford and the lead writer of the study. She said in a statement that losses in gray matter and the tissue damage in infected individuals led to a reduction in their abilities to perform complex tasks.

"All these negative effects were more marked at older ages," Douaud noted. "A key question for future brain imaging studies is to see if this brain tissue damage resolves over the longer term," she added.

The study was carried out when the Alpha version of COVID-19 was widespread in Britain. Past studies have found that some COVID-19 patients suffered from "brain fog," or a lack of mental clarity. The condition can cause memory problems and reduce a person's ability to be attentive, concentrate and process information normally.

The researchers did not say whether vaccination against COVID-19 had any influence on the brain changes. But the UK Health Security Agency said released findings on the issue last month. The agency said an examination of 15 studies found that vaccinated people were about half as likely to suffer long-term effects of COVID-19 compared with unvaccinated people.

Reuters and the University of Oxford reported on this story. Bryan Lynn adapted the reports for VOA Learning English.

scan – v. to use a special machine to read or copy (something, such as a photograph or a page of text) into a computer

decline – v. to refuse something

cognition – n. the use of conscious metal processes

concentrate – v. to direct attention or efforts toward a particular activity, subject or problem