Study: Evolutionary Changes in Voice Box May Have Led to Human Speech

Update Required To play the media you will need to either update your browser to a recent version or update your Flash plugin.
By Bryan Lynn
14 August 2022


Scientists say changes in the voice box of nonhuman primates over time may have led to human speech.

The researchers said they examined the voice box, also known as the larynx, in 43 different species of primates. Their study showed that humans differ from apes and monkeys because humans lack a structure called a vocal membrane. This contains small, muscular attachments to the vocal cords. 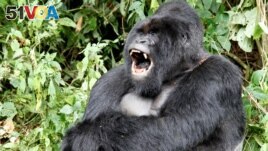 In this file photo, an endangered silverback mountain gorilla from the Nyakamwe-Bihango family yawns within the forest in Virunga national park near Goma in eastern Democratic Republic of Congo, May 3, 2014. (REUTERS/Kenny Katombe/File Photo)

The scientists said the loss of these tissues resulted in a stable vocal system in humans that was critical to the development, or evolution, of human speech. Such speech permits humans to express thoughts and feelings using clear and complex sounds, the team said.

Humans are primates, as are monkeys and apes. The evolutionary lineage that led to our species, Homo sapiens, split from the one that led to our closest living relatives, chimpanzees, about 6-7 million years ago. The researchers say the voice box changes are believed to have happened after that.

Takeshi Nishimura is with Kyoto University's Center for the Evolutionary Origins of Human Behavior in Japan. He was a lead writer of the study, which recently appeared in the publication Science. Nishimura said the research suggested that complex vocal structures in nonhuman primates can make it difficult to effectively control vibrations.

The larynx is a tube in the throat that is connected to the top of the windpipe and contains the vocal cords. It is used for talking, breathing and swallowing. "The larynx is the organ of voice, which creates the signal we use to sing and speak," Fitch said.

Only living species were included in the study because these soft tissues are not likely to appear in fossils, the remains of ancient life. This means that it is unclear exactly when the changes took place.

Fitch said it is possible the simplified development happened in a human ancestor called Australopithecus, which combined ape-like and human-like elements. Scientists believe Australopithecus first appeared in Africa about 3.85 million years ago.

The research team said the changes could have happened later in our ancestor grouping Homo, which first appeared in Africa 2.4 million years ago. Homo sapiens – the primate species human beings belong to – appeared more than 300,000 years ago in Africa.

Fitch noted, however, that while the evolutionary simplification of the larynx was important, it "did not give us speech by itself." He noted that other body developments also mattered for speech over time, including a change in the position of the larynx.

"Speech and language are critically related, but not synonymous," said Harold Gouzoules. He is a primatologist and psychologist at Emory University in Atlanta, Georgia. "Speech is the audible sound-based manner of language expression - and humans, alone among the primates, can produce it," he wrote in a related commentary in Science.

The researchers noted that the increased complexity of human spoken language came as a result of evolutionary simplification.

"I think it's pretty interesting that sometimes in evolution 'less is more,'" Fitch said. He added, "By losing a trait, you might open the door to some new adaptations."

vocal cord – n. folds of skin at the top of your throat that make sounds when air from your lungs moves over them

stable – adj. not likely to change or end suddenly

fossil – n. part of an animal or plant that lived a long time ago that has been preserved in rock

synonymous – adj. closely related or connected to something else

audible – adj. able to be heard

adaptation – n. the process or act of changing something to fit a new situation