Update Required To play the media you will need to either update your browser to a recent version or update your Flash plugin.
By Jonathan Evans
20 April, 2019


A new study released by the Proceedings of the National Academy of Science aims to define "a range of relationships between people and birds" across the United States.

Those are the words of Justin Schuetz, one of the study's writers. Schuetz is a biologist and researcher in Bath, Maine. He worked on the study with Alison Johnston, with Cornell University in Ithaca, New York.

Schuetz and Johnston studied Google searches performed between 2008 and 2017 to learn what Americans think about 621 bird species. The researchers knew where each search came from and the natural territory of each species. They also knew how often a bird species is seen in certain places. 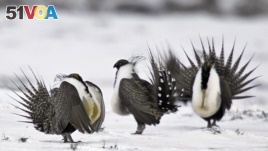 Birds in the "celebrity" category are those that were used in more Google searches than one would expect, given how often they are seen in an area. Birds in this category included whooping cranes, common ravens and peregrine falcons. Schuetz explained that the birds "have a reputation beyond where they live."

Next came the "friends or enemies" category. This included species that get more Google searches than expected, such as the ruffed grouse and purple martin. But the researchers could not tell whether the searchers' opinions of these birds were positive or negative.

Then came birds considered "neighbors." The few Google searches of these birds were limited to where they live, like the wrentit and the Abert's towhee.

Finally, there were the "strangers," birds that received little to no Google interest anywhere, including the Hammond's flycatcher and the Brewer's sparrow.

The researchers found that bigger birds and those that have colorful feathers and often stop at people's birdfeeders were generally more popular. Birds that served as mascots for professional sports teams reached celebrity standing.

Some of the results surprised the researchers. Schuetz said that Americans seem to be really interested in owls for reasons the research could not explain.

Jeffrey Gordon is president of the American Birding Association. He called the study "a fascinating framework for trying to understand how people are relating to birds."

David Ringer is the chief network officer for the National Audubon Society, a non-profit environmental organization. In an email to the AP, he wrote, "It's great to see how much we know and love some species. "I hope that many bird ‘strangers' will become ‘friends,' and ‘neighbors' will turn into ‘celebrities.'"

Jonathan Evans adapted this story for Learning English from reports by the Associated Press and Reuters. Ashley Thompson was the editor.

framework – n. a set of ideas or facts that provide support for something

mascot – n. a person, animal, or object used as a symbol to represent a group such as a sports team and to bring good luck