Update Required To play the media you will need to either update your browser to a recent version or update your Flash plugin.
By VOA
09 August, 2015


Tigers are the most powerful cats on the planet. Tigers are also endangered. A new study shows that the animals are far more at risk of extinction than wildlife experts believed.

The new census found that only about 100 tigers are left in the Sundarbans forest of Bangladesh. The Sundarbans is the largest mangrove forest in the world. It is also one of the last remaining habitats -- or natural homes -- for tigers.

The Sundarbans spread across a 10,000-square-kilometer area in southern Bangladesh and the eastern part of India. A number of rivers flow through the area. The Sundarbans is a UNESCO World Natural Heritage Site. About 60 percent of the mangrove forest is in Bangladesh. 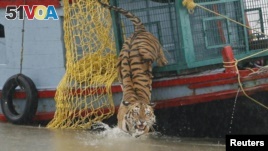 FILE - A male tiger is released into the waters of the river Harikhali at the Sundarbans delta forest, about 150 km (93 miles) south of the eastern Indian city of Kolkata, July 22, 2009.

In 2004, a separate population count found 440 tigers in the Bangladeshi part of the Sundarbans forest. The finding was based on the study of tiger paw prints, also called "pug marks."

The latest census used infrared cameras to arrive at what wildlife experts believe is a more exact number. The cameras took pictures when they observed something with body heat.

Mohammad Jahidul Kabir helped to organize the camera trapping project. He is with the Bangladeshi Wildlife and Nature Conservation Division.

He says, "We are sure that the pugmark-based previous census yielded an incorrect figure. The number of tigers in the Bangladeshi part of Sundarbans in 2004 was surely not as high as 440."

Now, after using camera trapping methods used in both countries, the entire forest is believed to hold about 182 tigers.

Indian wildlife scientist Yadvendradev Jhala studied the recent tiger censuses. He noted that more than three-fourths of the world's tiger population lives in India and Bangladesh. He said the new numbers show that the species is threatened. He blamed both illegal hunting and a new coal-fired power plant that, he says, will separate some tiger populations from each other.

He said, "The majority of coal needed for the power plant will be brought by barges plying in the water channel from the Bay of Bengal up the Sundarbans." This continuous traffic of commercial boats will form a barrier to tigers dispersing east-west, effectively dividing the Sundarbans population into two halves. Small populations have a high probability of becoming extinct."

Monirul Khan is a tiger activist and a member of Bangladesh's National Coordination Committee for Tiger Conservation. He said government officials who oversee wildlife are unable to protect the falling number of tigers.

He said, "Many areas of the vast Sundarbans remain unprotected due to insufficient patrol posts and forest guards of the forest department, giving the criminals the opportunity to poach the lucrative tiger."

The tigers mainly eat spotted deer. The deer also are heavily poached for meat and skin, further threatening the tigers.

Shaikh Azizur Rahman reported on this story. Marsha James adapted it for Learning English. George Grow was the editor.

census – n. an official count of a population

extinction – n. the state or process of a species or population dying out

poach – v. to hunt or kill an animal illegally

barge – n. a flat-bottomed boat for carrying freight, typically on canals or rivers