Update Required To play the media you will need to either update your browser to a recent version or update your Flash plugin.
By Christopher Jones-Cruise
14 June, 2017


A new study shows public opposition to the Islamic State (IS) group is growing in Indonesia, the world's most populous Muslim country.

The survey also found that a large majority of Indonesians hold negative opinions of the group.

Saiful Mujani Research & Consulting, a Jakarta-based business, reported the findings. Its researchers spoke with 1,350 adults from across Indonesia between May 14 and May 20.

Nearly 90 percent of those who had heard of the Islamic State (IS) group consider it a threat to the country.

Two years ago, a Pew Research Center survey found that 79 percent of Indonesians had negative opinions of IS, while only 4 percent supported the group. For that survey, Pew spoke with people in 11 countries with large Muslim populations, including several in the Middle East and Africa.

The Islamic State group has shown signs of expanding in Indonesia, which is home to 258 million people. But observers say the group does not have a future there.

"This is very encouraging," said Thamrin Tomagola, a sociologist at the University of Indonesia. "The survey makes us hopeful because the number of people who oppose ISIS is pretty big."

But he added that the government and the public must watch the Islamic State closely because it and other militant groups could weaken Muslim organizations in the country. 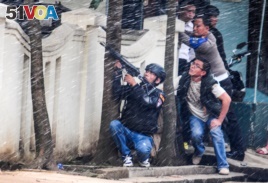 A police officer points his weapon near a government office following an explosion in Bandung, West Java, Indonesia, Feb. 27, 2017.

In the southern Philippines, conflict between the military and IS-supported militants worries some observers. They fear that Islamist terrorism may be gaining strength in Southeast Asia.

Countries there have made progress since the early 2000s in the fight against al-Qaida-supported groups, such as Abu Sayyaf in the Philippines and Jemaah Islamiyah in Indonesia.

Greg Fealy is an associate professor at the Australian National University who studies terrorism in Indonesia. He said the IS terror threat in Indonesia has been rising since the middle of 2014.

Azyumardi Azra is an expert on Islam and former president of the State Islamic University in Jakarta. He said that, unlike the Wahabi or Salafi movements, Indonesia's inclusive form of Islam and multicultural society are too strong to be defeated by the ideologies of Islamist militants.

"Islam Indonesia is an Islam inherent in the culture, and Indonesian culture is basically a tolerant culture," Azra said. "Even if IS pushes itself on Indonesia, the people of Indonesia, according to history, will rebel."

Indonesian officials note that IS has repeatedly threatened to attack the country. The group claimed responsibility for attacks in central Jakarta in January that killed eight people, including the four attackers.

The Islamic State has been seeking to increase its membership in Indonesia. The country's terrorism agency reported that as many as 384 people had joined by January 2017. It says most of them have traveled to Syria or Iraq. Government reports last year suggested that as many as 169 to 300 Indonesians who fought for IS have returned home.

encourage – v. to make (something) more appealing or more likely to happen

multicultural – adj. relating to or including many different cultures

inherent – adj. belonging to the basic nature of someone or something

tolerant – adj. willing to accept feelings, habits or beliefs that are different from your own