Update Required To play the media you will need to either update your browser to a recent version or update your Flash plugin.
By Hai Do
29 April 2020


A major study shows the experimental drug remdesivir to be effective in fighting the new coronavirus, American health officials say.

The United States National Institutes of Health led the study. It compared treatment with remdesivir to usual care in 1,063 hospitalized coronavirus patients around the world.

Dr. Fauci said the remdesivir reduced recovery time. He said patients who received remdesivir recovered on average four days earlier than those who got usual care.

"What it has proven is that a drug can block this virus," Fauci said. "This will be the standard of care."

He also said there were fewer deaths among those who took remdesivir. The full results of the study will be published in a medical journal soon, Fauci added. 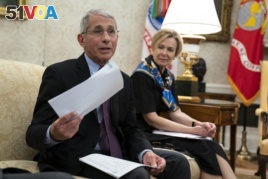 Nearly 225,000 people have died of COVID-19 and over 3 million have been infected with the coronavirus.

The U.S. Food and Drug Administration said Wednesday that it has been talking with remdesivir maker, Gilead Sciences. The agency wants the company to make the drug "available to patients as quickly as possible..."

However, the drug has not been approved for any use anywhere in the world. Other possible treatments continue to be studied.

Earlier, animal studies showed remdesivir was effective against SARS and MERS, two diseases also caused by coronaviruses. It helped prevent infection and some symptoms when given early enough in the disease process.

Remdesivir is administered directly to the bloodstream through IV, a continuous fluid flow device.

"We are excited and optimistic," said Dr. Mark Denison of Vanderbilt University in Nashville, Tennessee. His laboratory tested remdesivir against other coronaviruses in 2013. It was not involved in the NIH study.

"It's active against every coronavirus that we've ever tested," Denison said. "It was very hard for the virus to develop resistance to remdesivir. That means the drug would likely be effective over longer-term use," he said.

A less promising result came from an incomplete study of remdesivir on severely sick patients in China. That research found the drug did not speed recovery. However, that examination was halted early, after only about half the expected patients were registered for the study. The incomplete results were reported Wednesday in the British medical journal, Lancet.

In France, a group of hospitals reported success with use of another drug, Acetemra, against COVID-19. In a study of 129 coronavirus patients, 65 were treated with the drug while the other patients received usual care. The doctors did not release details, but said they were preparing to publish results. Acetemra is used to treat rheumatoid arthritis and other diseases.

Health officials believe any vaccine for COVID-19 is at least a year away.

Hai Do adapted this story for Learning English based on Associated Press news reports. Caty Weaver was the editor.

standard - n. something that is considered acceptable or desirable

journal - n. a magazine that reports on things of special interests

symptom - n. a change in the body which indicates that a disease is present