Update Required To play the media you will need to either update your browser to a recent version or update your Flash plugin.
By Pete Musto
02 September, 2018


A new study shows that guns are responsible for about 250,000 deaths worldwide every year.

It also found that the United States is among just six countries in which half of all gun deaths take place.

The findings are from one of the most wide-reaching investigations of gun deaths to date. A report on the study appeared in The Journal of the American Medical Association in late August. An editorial published with the report called gun deaths "a major public health problem for humanity."

Recent news stories make it seem like gun violence is increasing around the world. But the new report tells a more complex story. 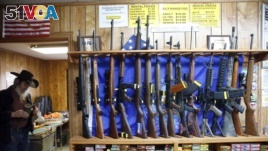 In this March 15, 2016 photo, guns for rent are on display at a shooting range and retail store in Cherry Creek, Colorado.

Christopher Murray, the lead investigator, is a Professor of Global Health at the University of Washington. He told the Associated Press the numbers show more than "how many guns are around in a country."

Murray noted that cultural beliefs about guns and suicide differ from one country to another around the world.

"That's where we get this incredible range of firearm deaths," Murray added.

There were larger increases in many of the 195 countries involved in the study, especially in Central America and South America. Researchers said the illegal drug trade and economic unrest may have been partly responsible.

Brazil, Colombia, Guatemala, Mexico and Venezuela are the countries that, along with the U.S, were home to half the deaths the study reported. El Salvador had the highest gun death rate of all. Nearly 40 in every 100,000 Salvadorans died in gun violence. Singapore had the lowest rate, with 0.1 death per 100,000 individuals.

The study raises concerns about the lack of research on causes of gun violence and ways to prevent it, the editorial said.

Lindsay Tanner reported this story for the Associated Press. Pete Musto adapted her report for VOA Learning English. George Grow was the editor.

We want to hear from you. How can countries work to reduce or even completely eliminate gun deaths? Write to us in the Comments Section or on 51VOA.COM.

editorial – n. a piece of writing in a publication that gives the opinions of its editors or publishers

homicide(s) – n. the act of killing another person

range – n. a group or collection of different things or people that are usually similar in some way