Update Required To play the media you will need to either update your browser to a recent version or update your Flash plugin.
By Andrew Smith
31 August 2022


A study published Monday predicts that melting ice in Greenland will cause sea levels around the world to rise by at least 27 centimeters by 2100.

This would be more than double an earlier prediction by a United Nations body. Last year's Intergovernmental Panel on Climate Change report predicted a sea level rise of six to 13 centimeters by the year 2100. 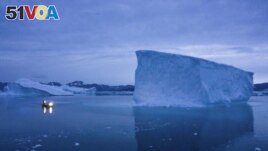 FILE - A boat navigates at night next to large icebergs in eastern Greenland on Aug. 15, 2019. Ice from Greenland's ice sheet will eventually raise global sea level by at least 27, according to a study released Monday, Aug. 29, 2022. (AP Photo/Felipe Dana, File)

The study appeared in the scientific publication Nature.

The researchers said, even if global temperatures do not rise above current levels, the ice at the edges of Greenland's ice sheet will continue melting.

Richard Alley is a glaciologist at Penn State University who was not part of the study. He said the melting ice is similar to what happens when an ice cube is put in a cup of tea. He said that glaciers will continue to decrease in size because they are in warmer air, just like an ice cube will melt if placed in warm tea.

The researchers predicted that 3.3 percent of Greenland's ice will melt. One writer estimated that more than 110 trillion tons of ice is going to melt.

William Colgan helped write the study. He studies glaciers at the Geological Survey of Denmark and Greenland. He described the ice this way: "It's dead ice. It's just going to melt and disappear from the ice sheet."

The researchers used the same method that is used to study ice loss on mountain glaciers. But they extended it to include all of Greenland.

Some places further away from Greenland would get more sea level rise than some places closer to Greenland, such as the East Coast of the United States.

The 27-centimeter rise would be in addition to increases in sea levels from normal tides and storms. Ellyn Enderlin is a geosciences professor at Boise State University who was also not part of the study. She said the sea level rise "will have huge societal, economic, and environmental impacts."

Colgan, the co-writer of the study, answered saying the research team does not know how long it will take for the ice to melt. He said it might happen by 2100 or by 2150 at the latest.

This story was reported by Seth Borenstein for the Associated Press. Andrew Smith adapted it for VOA Learning English.

accumulate –v. to increase in amount

glacier -n. a large body of ice, usually moving slowly down a valley or slope

imbalance -n. not being in equal amount

exceed -v. to be more than or greater than

glaciologist -n. a person who studies and researches glaciers

geoscience -n. the sciences dealing with the earth, such as geology, geochemistry, and geophysics

impact –n. an effect or influence

outlier -n. a number, person, or thing that is not usual within a particular group