Update Required To play the media you will need to either update your browser to a recent version or update your Flash plugin.
By Hai Do
11 July 2022


A small study from the U.S. National Institutes of Health says the immune response caused by COVID-19 infection may damage the brain's blood vessels. The reaction could lead to neurological problems known as long COVID.

In the study, researchers examined brain changes in nine people who died suddenly after being infected with SARS-CoV-2, the virus that causes COVID-19. The results appeared last week in the publication Brain.

Damage to the brain's blood vessels 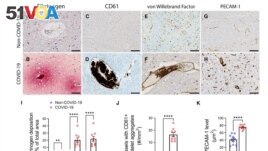 The researchers found that antibodies — proteins produced by the immune system to fight viruses — are involved in an attack on the cells lining the brain's blood vessels. This causes inflammation and damage.

The results were similar to an earlier study done in 2020.

In both studies, SARS-CoV-2 was not found in the patients' brains. This suggests the virus was not attacking the brain directly.

NIH scientist Avindra Nath is the senior researcher of the study. He said, "We had previously shown blood vessel damage and inflammation in patients' brains at autopsy, but we didn't understand the cause of the damage." An autopsy is the examination of a dead body to find out the cause of death.

For the study, Dr. Nath and a team of researchers examined brain tissue from nine individuals between the ages of 24 and 73. The individuals were chosen because their scans showed signs of blood vessel damage in the brain. The scans were then compared to those from 10 individuals in a control group.

The researchers found that antibodies produced to fight COVID-19 may mistakenly target cells that line the brain's blood vessels. These cells, called endothelial cells, serve as barriers to keep harmful substances from reaching the brain. Damage to the cells causes bleeding and blockage in some COVID-19 patients and increases the risk of stroke.

As in their earlier study, researchers found signs of leaky blood vessels. This suggests that the links between endothelial cells in the blood-brain barrier were damaged.

Dr. Nath said that once the leaks happened, immune cells "may come to repair the damage, setting up inflammation" in the brain.

Together, these findings may provide information about the cause of neurological problems related to COVID-19. The findings may also be used to find new treatments to target the damaged links between the endothelial cells in the blood-brain barrier.

The study may also help with understanding and treating long-term neurological conditions after COVID-19. The conditions include headache, tiredness, loss of taste and smell, sleep problems, and forgetfulness known as "brain fog."

If the nine patients in the study had survived, the researchers believe they would have likely developed long COVID.

"It is quite possible that this same immune response persists in long COVID patients," Dr. Nath said. The findings, he added, are "very important" to researchers seeking to find treatments for long COVID.

Hai Do wrote this story for Learning English with information from the National Institutes of Health.

response - n. something that is done as a reaction to something

neurological - adj. related to the study of the nervous system and the diseases that affect it

vessel - n. a vein or artery that carries blood through the body

inflammation - n. a condition in which part of the body becomes swollen and painful

stroke - n. a serious illness caused when a blood vessel in the brain is broken or blocked

persist - v. to continue to exist beyond the expected time