Update Required To play the media you will need to either update your browser to a recent version or update your Flash plugin.
By Caty Weaver
28 June 2020


Researchers from Imperial College London say the chance of dying from COVID-19 rises with increasing poverty.

They blame inequalities in society in poor countries for the increased risk.

The coronavirus crisis continues to expand in many countries that are considered lower-income or lower-middle-income, such as India and Nigeria. Johns Hopkins University Coronavirus Resource Center reports India, for example, has recorded over 440,000 COVID-19 cases and more than 14,000 deaths from the disease.

The Imperial College researchers say "health inequities" mean that some groups are at greater risk. Health inequities are unfair or avoidable differences in health among different groups in society.

The report looks at such inequities based on three measures: the availability of hand-washing places, the ability to work from home and the ability to go to a hospital. 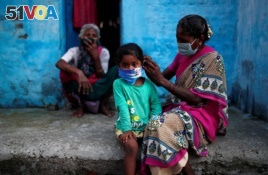 A woman wearing a protective face mask adjusts her daughter's face mask outside their house at a slum area, during an extended nationwide lockdown to slow the spreading of the coronavirus disease (COVID-19), in New Delhi, India, June 24, 2020

Peter Winskill was the lead writer of the report and spoke to VOA over Skype earlier this month. "We estimated on average a 32 percent increase in the probability of death from COVID-19 when comparing individuals from the poorest households to those in the wealthiest households," he said.

The main reason for this, Winskill added, is a lack of the ability to go to a hospital and intensive care centers at hospitals.

Poorer families also often live in larger households that include several generations. This makes it harder to protect older family members through social distancing. Other indirect effects of the health crisis also are harder on poorer people, Winskill said. He noted lockdown periods during important agricultural periods of planting and harvesting.

The researcher said, "We also know from the data that individuals in poorer households in these areas also depend more on food grown themselves, so there are serious food security issues."

In addition, COVID-19 has led to reduced health services for other diseases. Winskill said the research shows that deaths from AIDS, tuberculosis and malaria may increase over the next five years. He said there may be an increase of up to 10 percent for AIDS, 20 percent for TB and 36 percent for malaria deaths in areas with high level disease burden.

The report says existing patterns of inequality mean the poorest are less able to protect themselves from infection. The report's writers urge governments to improve the availability of hand-washing and strengthen community health services.

Henry Ridgwell wrote this report for VOA. Caty Weaver adapted it for Learning English. --------Mario Ritte, Jr. was the editor.

society –n. the people of a particular country, area, time, etc., thought of especially as an organized community

household –n. the people in a family or other group that are living together in one house

burden –n. something oppressive or worrisome

pattern –n. something that happens in a regular and repeated way