Update Required To play the media you will need to either update your browser to a recent version or update your Flash plugin.
By Bryan Lynn
16 October 2022


A new study has found that many drivers using driver assistance tools often treat their vehicles like they are fully self-driving.

The study warns that drivers who put too much trust in driver assist technologies are putting themselves at risk for serious accidents.

The research involved drivers of three vehicles that offer advanced driver assistance systems. Each vehicle came from one of three companies: Cadillac, Nissan/Infiniti and Tesla. 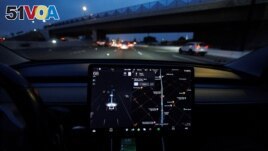 In this file photo, a Tesla Model 3 vehicle drives on autopilot along the 405 highway in Westminster, California, U.S., March 16, 2022. (REUTERS/Mike Blake/File Photo)

The study was led by the Insurance Institute for Highway Safety (IIHS), a nonprofit group financed by America's insurance industry. The group carries out research and crash tests and seeks to persuade automakers to design safer vehicles.

The IIHS said it questioned 600 drivers who often use the manufacturers' driver assistance tools. A majority of users said they were more likely to perform non-driving related activities, like eating or texting, while using assist technologies.

Cadillac's driver assist tool is called Super Cruise. The study found that 53 percent of active users of that system said, "they were comfortable treating their vehicles as fully self-driving." Tesla's driver assist system is called Autopilot.

The results come even as car manufacturers have repeatedly warned drivers that they must never fully depend on driver assistance for full operation of the vehicle. Users are urged to be fully prepared to take control of driving at any time.

There have also been highly publicized accidents involving cars with drive assistance programming.

Both Super Cruise and Autopilot have a feature that turns off the vehicle's advance driver assistance system if users do not appear to be attentive while driving. The study found that about 40 percent of users of Autopilot and Super Cruise reported the systems had at some point turned off while they were driving and would not reactivate.

IIHS's President, David Harkey, said in a statement, "The big-picture message here is that the early adopters of these systems still have a poor understanding of the technology's limits." He added that it is possible that "system design and marketing are adding to these misconceptions."

The study comes as the National Highway Traffic Safety Administration (NHTSA) examines a series of crashes involving Tesla's Autopilot system. Since 2016, the NHTSA has opened 37 special investigations involving 18 crash deaths involving Tesla vehicles where systems like Autopilot were suspected of use.

Tesla did not answer requests for comment from Reuters news agency. But the company has said in the past that Autopilot is meant for use with a fully attentive driver who is prepared to take control of vehicle operation.

General Motors, which produces Cadillac models, said it "believes driver engagement is critical and required to operate any advanced driver assistance system in any vehicle we sell."

IIHS said advertisements for Super Cruise center on the system's "hand-free" abilities. It noted that Autopilot uses the same description used in passenger airplanes, which "implies Tesla's system is more capable than it really is."

By comparison, IIHS said ProPILOT Assist "suggests that it's an assistance feature, rather than a replacement for the driver."

Nissan said its name "is clearly communicating ProPILOT Assist as a system to aid the driver, and ... requires hands-on operation."

Bryan Lynn wrote this story for VOA Learning English, based on reports from the Insurance Institute for Highway Safety and Reuters.

insurance – n. an agreement in which you pay a company and they pay your costs if you have an accident, injury, etc.

adopt – v. to accept or state using something new

misconception – n. an understanding of something that is wrong

imply – v. to suggest of show something, without saying it directly