Study: Mars Missions Should Be Limited to 4 Years to Protect from Radiation

Update Required To play the media you will need to either update your browser to a recent version or update your Flash plugin.
By Bryan Lynn
05 September 2021


A new study has found that future missions to Mars should be limited to four years to protect astronauts from harmful radiation.

The study also says that missions should be carried out during specific times to reduce the level of exposure to dangerous particles.

China has also announced plans to send astronauts to Mars by 2033. Such missions present great risks to humans because of the high level of radiation in space.

Radiation exposure can cause a series of health issues, including skin burns, heart problems and cancer. NASA has spent many years studying ways to protect human space travelers from radiation.

On Earth, we also experience exposure to radiation from the sun. But our planet's magnetic field protects us from dangerously high levels.

Two main kinds of radiation can affect humans and equipment in space. One is produced by particles released from the sun. The other comes from high energy particles created by cosmic rays from outside our solar system. NASA says the second kind can be more dangerous to humans and more destructive to equipment.

In the new study, researchers used modeling methods to predict levels of radiation exposure during future space missions. They combined geophysical models of particle radiation with models for how radiation would affect human passengers and spacecraft. 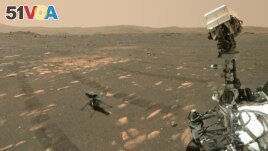 NASA's Perseverance Mars rover took a 'selfie' with the Ingenuity helicopter, seen here about 13 feet (3.9 meters) from the rover. This image was taken by the WASTON camera on the rover's robotic arm on April 6, 2021, the 46th Martian day.

The international group of researchers recently published their study in Space Weather. The results showed that the best time for a human space flight to Mars would be during what is known as solar maximum. This is a period within the sun's magnetic cycle that experiences the most intense solar activity.

The researchers said in a statement that this period would be a good time for a flight because, "the most dangerous and energetic particles from distant galaxies are deflected by the enhanced solar activity," during solar maximum.

The study also found that a round-trip mission to Mars should not last longer than four years. A longer mission would expose astronauts to "dangerously high" amounts of radiation, even if the trips to and from Mars were made during safer travel times. The average flight time to Mars is about nine months.

The spacecraft used for carrying astronauts to Mars would require special protective shielding, the study found. But the researchers said this protective material cannot be too heavy. If the material is too thick, it could actually increase the amount of secondary radiation the astronauts could be exposed to.

The research team included scientists from the University of California, Los Angeles (UCLA). UCLA research geophysicist Yuri Shprits was a co-writer of the study. He said the findings suggest that future missions to Mars can be safe for humans as long as they follow the research recommendations.

Shprits said, "This study shows that while space radiation imposes strict limitations on how heavy the spacecraft can be and the time of launch -- and it presents technological difficulties for human missions to Mars -- such a mission is viable."

Bryan Lynn wrote this story for VOA Learning English, based on reports from UCLA, Space Weather and NASA. Ashley Thompson was the editor.

cosmic ray – n. high-energy particles that move through space at nearly the speed of light

deflect – v. to make something change direction by hitting or touching it

enhance – v. to improve something

shield – n. a piece of equipment used as protection

impose – v. to put or place

viable – n. effective and able to be successful