Update Required To play the media you will need to either update your browser to a recent version or update your Flash plugin.
By Dan Novak
23 October 2022


Genes that helped people survive the plague hundreds of years ago may have made people more vulnerable to some diseases today, a new study says.

The information is a good example of the way germs shape us over time, scientists said in the new study published Wednesday in the journal Nature.

"Our genome today is a reflection of our whole evolutionary history," said Luis Barreiro. He is one of the writers of the research. Some germs, like those behind the bubonic plague, have had a big effect on our immune systems. 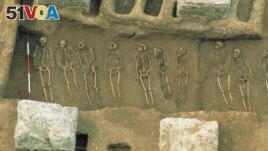 Excavation of the East Smithfield plague pits in London, which were used for mass burials in 1348 and 1349. (MOLA via AP)

The Black Death in the 14th century was the single deadliest event in recorded history. It spread through Europe, the Middle East and northern Africa, killing 30 to 50 percent of the population.

Barreiro worked with partners at the University of Chicago, McMaster University in Ontario and the Pasteur Institute in Paris. They examined ancient DNA samples from the bones of more than 200 people from London and Denmark. The people died during a 100-year period before, during and after the Black Death went through that area.

They identified four genes that, depending on the version, either protected against or increased vulnerability to the bacteria that causes bubonic plague. The plague is most often spread by the bite of an infected flea.

They found that what helped people in ancient times led to problems generations later. Some of the same genetic versions identified as protective against the plague are connected to certain diseases, like Crohn's disease, rheumatoid arthritis and lupus. In these sorts of diseases, the immune system that defends the body against disease and infection attacks the body's own healthy tissues. When that happens, it is called a hyperactive immune system.

"A hyperactive immune system may have been great in the past but in the environment today it might not be as helpful," said Hendrik Poinar. He in an anthropology professor at McMaster and another writer of the new study.

Past research has also sought to examine how the Black Death affected the human genome. But Barreiro said he believes his team's study is the first to show that the Black Death was important to the evolution of the human immune system. One important part of the study, he said, was to center on a given time window around the event.

Monica H. Green is a writer and historian of medicine who has studied the Black Death. She said the research includes important issues, like how the same version of a gene can protect people from a bad infection, but and also put modern people at risk for other illnesses.

There is also a question of how the COVID-19 pandemic will affect human evolution. Barreiro said does not think it will have a big effect because COVID is much less deadly than the Black Death.

In the future, however, he said more deadly pandemics will continue to shape us at the most basic level.

"It's not going to stop," Barreiro said. "It's going to keep going for sure."

plague — n. a disease that causes death and that spreads quickly to a large number of people

genome — n. the complete set of genetic material of a human, animal, plant, or other living thing

reflection — n. something that shows the effect, existence, or character of something else

evolution — n. the process by which changes in plants and animals happen over time

adapt — v. to change so that it functions better or is better suited for a purpose

flea — n. a very small insect that lives on animals and that has strong legs used for jumping