Update Required To play the media you will need to either update your browser to a recent version or update your Flash plugin.
By Dan Friedell
07 August 2022

A new study has found that, as this age group entered their 30s, most were not living very far from where they lived as children.

The study found that 90 percent of them lived less than 800 kilometers from where they grew up. 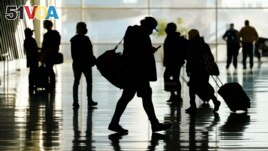 FILE - Passengers walk through Salt Lake City International Airport Tuesday, Oct. 27, 2020, in Salt Lake City. Not as many young adults live far away from where they grew up compared to their parents. (AP Photo/Rick Bowmer)

Researchers at the U.S. Census Bureau and Harvard University completed the study. They found that, by the time millennials turn 26, 80 percent had moved less than 160 kilometers from where they grew up.

The information in the study came from the most recent 10-year-census, tax information and a survey.

The report found that the chosen new home for millennials who did move away was related to race. For example, Black adults who moved away from home mostly centered on Atlanta, Georgia; Houston, Texas; and Washington, D.C.

The study also showed that some cities do an especially good job of holding onto their young people. For example, about 75 percent of young people who grew up in Chicago stayed there.

The research described a "New Great Migration" for young Black people who came from wealthier families. A high number of them were likely to move away from home. However, they were likely to move to the large cities of the southern U.S. That is different from the original "Great Migration" of the first half of the 1900s, which saw Black people move from the southern U.S. to the north.

The study of millennial movement is supported by other studies showing less movement in general in the U.S.

About 70 years ago, studies showed about 20 percent of Americans moved each year. Now, that number is only 8.4 percent.

A recent report from the Pew Research Center also found that 25 percent of young adults are living in multi-generational households. That is up from 9 percent 50 years ago.

The recent Harvard study noted that, in general, people said their move was not completely related to getting a better-paying job.

But for some, money did make a difference.

Andrew Waldholtz is 35 years old. He grew up in Virginia Beach, Virginia. Today, he lives over 1,500 kilometers away in St. Louis, Missouri. That makes him unlike many others in his age group. He went to college in Washington, D.C., moved back to Virginia Beach for a time and then went to law school in Ohio.

He said the move to Missouri was a good one because it is not a costly place to live. He has family members there, as well.

After having trouble finding a job when he was younger, it was important for him to find a place where there would be good work.

"All of us need a job to pay our bills," Waldholtz said. "That factor has to be the most important factor."