Update Required To play the media you will need to either update your browser to a recent version or update your Flash plugin.
By Mario Ritter Jr.
26 September 2021


Scientists studying the genetic material of Japanese people say that three ancient populations were ancestors of modern Japanese rather than two.

The research was published last week. It suggests that the genetic ancestry of modern Japanese is more complex than experts had thought.

The researchers studied the genetic information of 17 ancient Japanese people. They took deoxyribonucleic acid, or DNA, from the bones of 12 ancient people for the study. They also used earlier information from five other individuals. They then compared the DNA to that of modern Japanese people. 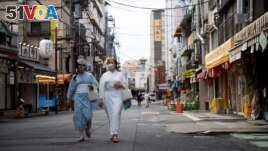 The research confirmed that there were two ancient groups of people in Japan. The first was an early group of hunter-gatherers. They first appeared between 20,000 and 15,000 years ago during what is called the Jomon period.

The second group is estimated to have first come from Northeastern Asia about 3,000 years ago. That group is believed to have brought modern rice farming methods to Japan during what is called the Yayoi period.

The researchers said these two groups are thought to be the main genetic ancestors of modern Japanese people.

But the researcher said they found that 71 percent of modern Japanese genetic ancestry comes from a third population that arrived about 1,700 years ago. The people of this period, known as the Kofun, are believed to have brought cultural ideas such as centralized leadership. These migrants had an ancestry similar to Han people in modern China.

Shigeki Nakagome was one of the leaders of the research published in Science Advances. He is with Trinity College Dublin in Ireland. He said, "We are very excited about our finds on the tripartite structure of the Japanese populations." He said the findings were important because they used the study of ancient genetic material to "rewrite the origins of modern Japanese."

Daniel Bradley is a co-leader of the research and is also with Trinity College Dublin. He said the ancient DNA showed ancestry in a way that could not be seen using modern genetic material.

The Kofun period is named for the large burial places made of earth that the people then built for their rulers. During that period, important technologies were arriving from China by passing through the Korean Peninsula.

Scientists use the word implement to describe early weapons such as swords.

Japan is an island nation that includes thousands of islands. Its geography made migration in ancient times difficult. The first people are believed to have reached Japan when world sea levels were lower, more than 30,000 years ago.

The researchers said the genetics of Japan's population have not changed very much since the Kofun period, which lasted about 400 years.

Will Dunham reported this story for Reuters. Mario Ritter Jr. adapted it for VOA Learning English. Susan Shand was the editor.

origin –n. the point or place where something begins or is created : the source or cause of something

characters –n. (pl.) a symbol (such as a letter or number) that is used in writing or printing

inscribed –adj. to place writing on an object often by cutting into the material itself