Update Required To play the media you will need to either update your browser to a recent version or update your Flash plugin.
By Bryan Lynn
20 June 2021


Japanese researchers have successfully produced healthy mice from frozen sperm that was stored on the International Space Station (ISS) for almost six years.

The sperm was freeze-dried and sent to the ISS in 2013. Freeze-drying is a process that removes water from frozen substances in an effort to make them last for a long time.

Once the sperm was brought back to Earth and unfrozen, it resulted in the birth of 168 healthy baby mice. The researchers said there was little difference between the mice produced by space sperm and those made with usual sperm.

Teruhiko Wakayama is a developmental biologist at Japan's University of Yamanashi. He was the lead writer of a study reporting the results in Science Advances.

"All pups had normal appearance," Wakayama told the French news agency AFP about the experiment. When researchers examined genes of the mice "no abnormalities were found," he said. 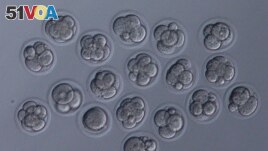 Mouse sperm cells that were freeze-dried, stored in a sealed capsule and preserved on the orbiting International Space Station were injected into unfertilized egg cells in a laboratory, as seen in this undated handout photo. (Teruhiko Wakayama, University of Yamanashi/Handout via REUTERS)

The team launched three containers, each carrying 48 samples of freeze-dried sperm, to the ISS in 2013. Freeze-drying permits substances to survive at room temperature for up to a year so no freezer was needed on the launch rocket. On board the ISS, the samples were kept inside a freezer at minus 95 degrees Celsius.

Samples were returned to Earth at different times. The first were flown back after nine months and the second after two years. When the last container returned to Earth in June 2019, it had spent 5 years and 10 months in space. The returned samples were injected into egg cells, which were put inside female mice.

The experiment aimed to find out whether taking in radiation for long periods in space would damage DNA in reproductive cells or pass on mutations to babies. This same issue could be a problem for humans in the future if space exploration greatly expands, with large populations possibly living on other planets.

Deep space is filled with high radiation produced by solar particles and cosmic rays from outside our solar system.

"In the future, when the time comes to migrate to other planets, we will need to maintain the diversity of genetic resources," Wakayama wrote in a paper on the experiment. He added that such diversity -- both in humans and animals – can protect against increases in harmful mutations seen in inbreeding.

Wakayama said carrying freeze-dried reproductive cells from large numbers of individuals would be easier and less costly than transporting people or animals themselves to space. This method could permit space colonies to develop that include animals, he added.

The researchers say their results suggest that freeze-dried sperm could be effectively stored on the ISS for up to 200 years.

Bryan Lynn wrote this story for VOA Learning English, based on reports from Reuters, Agence France-Press and Science Advances. Caty Weaver was the editor.

sperm – n. a small cell produced by a male animal that joins an egg from a female animal to create a baby

pup – n. a young dog or other kind of baby animal

sample – n. a small amount of something that shows what the thing is like

cosmic rays – n. high-energy particles that move through space at nearly the speed of light

maintain – v. to make something continue in the same way