Study: Nearly 70 percent of Glaciers Could Melt Away by 2100

Update Required To play the media you will need to either update your browser to a recent version or update your Flash plugin.
By Bryan Lynn
14 January 2023


A new study has found that nearly 70 percent of the world's glaciers could disappear by the end of 2100.

A group of international scientists recently reported the study in the publication Science. They said their predictions were based on current climate change developments. However, the researchers noted many glaciers can be saved if planet warming is reduced.

The findings provide the most detailed examination yet of the world's 215,000 glaciers. 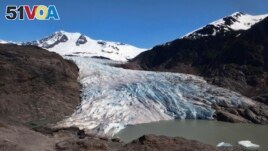 In this file photo, pieces of ice float on Mendenhall Lake in front of the Mendenhall Glacier on Monday, May 30, 2022, in Juneau, Alaska. (AP Photo/Becky Bohrer)

Regine Hock is a professor of geophysics at the University of Oslo and University of Alaska Fairbanks. She was a co-writer of the study. She told the French news agency AFP, "Every degree increase produces more melt and loss."

Hock added that if Earth's temperature can be reduced, glacier losses can also be limited. "In that sense, there is also a little bit of hope," she said.

Current estimates suggest that if climate change keeps heading in the same direction, the world is set to have a 2.7 Celsius rise in temperature. That increase would cause nearly all glaciers in Central Europe, Western Canada, the continental United States and New Zealand to melt by 2100, the study found.

If the world temperature rose as high as 4 degrees Celsius, large glaciers such as those in Alaska would be more affected and 83 percent of glaciers would melt away by the end of the century, the researchers predicted.

The disappearance of glaciers will also affect water resources, the researchers said. Glaciers provide freshwater for about two billion people.

The study's predictions were reached through observations of the size of each glacier over many years. The researchers also used computer simulations to arrive at the new findings.

Hock noted that it is currently unclear whether the study's estimates will come true. But she said the extreme predictions do not mean that it is too late to reduce glacier loss through human actions. Hock urged policymakers around the world to take action now to prevent such glacier loss from happening.

The Associated Press and Agence France-Presse reported on this story. Bryan Lynn adapted the reports for VOA Learning English.