Update Required To play the media you will need to either update your browser to a recent version or update your Flash plugin.
By Dan Friedell
08 October 2022


Experts often tell students to center their efforts on a narrow field to get a job after school. But recent research into Nobel Prize winners suggests that wider interests are important.

One of the winners of this year's Nobel Prize in Chemistry was Danish scientist Morten Meldal. He received the award with two other chemists for their work on "click chemistry." Click chemistry describes when scientists create materials, such as polymers, that join molecules together even in living things.

Meldal is 68 years old and works at the University of Copenhagen. When describing his career, Meldal said he started out as an engineer but changed to chemistry because, he "wanted to understand the world." 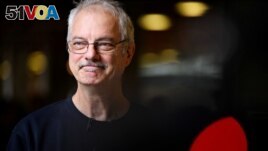 In a discussion with the Nobel Prize organization, he talked about his co-winner, Carolyn Bertozzi of Stanford University. He said "she has such a broad knowledge of both chemistry and biology and she knows how to utilize her knowledge in a very exquisite way."

Meldal's experience and the way he sees things may come as a surprise to students. They might believe they have to center their work and school lives in one field to be successful.

But a study from professors at Michigan State University shows that is not always the case.

Michele Root-Bernstein and Robert Root-Bernstein published their study this spring in the Creativity Research Journal. They said that a large number of Nobel Prize winners can be described as "polymaths."

Polymaths are people who have many different interests in both their work and personal lives. Sometimes they are called "Renaissance" men or women. That is another way of describing a person who knows a lot about many different fields.

The writers looked at past Nobel Prize winners and their students. They decided that when students of winners go on to win Nobel Prizes, some of what they learned from their teachers is how to live a life with many interests. They are, in a way, learning how to be creative.

Having many interests, the Root-Bernsteins wrote, permits scientists to look for creative ways to solve problems. In fact, one important part of science is not discovering answers, but recognizing problems that need to be solved.

The prize winners, the Root-Bernsteins said, transfer "skills, techniques and materials from one field to another."

They said Alexis Carrel won his Nobel Prize in medicine in 1912 by using techniques he learned from the clothing business. He realized that people who used thread to make and fix clothing had a skill that could be used in operations to put new organs into people's bodies.

In 1978, a professor from Carnegie Mellon University in Pennsylvania won the Nobel Prize in economics. His name was Herbert Simon. He worked in many parts of the university during his career and supported projects in computer science, artificial intelligence, psychology, philosophy and economics.

Outside of work, he played piano, wrote music, painted, made drawings and played chess.

In a book he wrote about his life, Simon said: "I can rationalize any activity I engage in as simply another form of research..."

One winner in medicine – Christiane Nusslein-Volhard – said in 2003 that she is "very curious and I like to understand things." She won her prize in 1995 for work she did on genetic controls in the early development of the embryos of insects and fish. But during some parts of her life, she made games called puzzles, drew pictures and wrote a cookbook.

In 2017, she told young scientists to avoid following the "mainstream" and move out of their study areas in order to be independent and original.

The Michigan State professors study creativity. They found that most professionals are not like the prize-winners. The prize-winners are special in that they regularly look for the chances to learn new things, even outside of their jobs.

Nobel winners are nine times more likely to have experience in working with wood, metal or in the arts than most scientists. The writers also found that even those who win in a field like economics have experience in other areas. Some of the economics winners studied math, physics and astronomy before doing their economics research.

The Michigan State researchers say that the Nobel winners have an open mind about their life experiences. Unlike many people who spend long hours at work and give up some of their outside interests, Nobel winners believe their hobbies are important to creativity.

Dario Fo won the Nobel Prize in Literature in 1997. He talked about drawing and painting as a way to solve problems that came up in his writing. "When I'm having difficulty with a play, I stop writing so I can draw out the action in pictures," he said.

The researchers say that, even among people who do not win big prizes, those with many interests are often successful. They pointed to a 2012 report about students who study two major fields in college. That study plan is called a "double major."

The writers, from Vanderbilt University in Tennessee, said double majors are often more creative and more interested in starting their own businesses than those who centered on only one study area.

Other researchers have found that having an outside activity that makes you think can be help predict future success in a job. Some of those activities include playing chess, performing music or creating art.

Dan Friedell adapted this story for VOA Learning English based on a story first published in The Conversation and material from The Associated Press.

click –n. the short, sharp sound made often by something fitting into something else correctly

broad –adj. wide, including many things

utilize –v. to use, to make use of

technique –n. a way of doing something using special knowledge or skill

transfer –v. to move from one place to another

thread –n. a long piece of material that is used to sew cloth or tissue

artificial intelligence –n. a field of computer science that aims to give machines the ability to "think" like humans

rationalize –v. to think about or describe something in a way that makes it seem correct

curious –adj. to have the desire to learn more about something

mainstream –n. the thoughts, beliefs and choices that are accepted by the largest number of people

original –adj. the first example of something; something unlike other things