Scientists say they have confirmed that strange-looking fossils from more than 500 million years ago are remains of an animal.

That would make it one of the earliest known creatures.

The fossils are found within rocks. They are round with many lines, and look similar to the markings of a leaf. 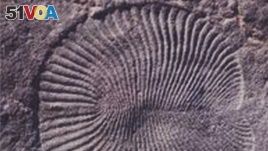 The fossils were first described in 1947. They have been found in Australia and Russia. Some are very small; others are over a meter long.

Scientists have named the mysterious ancient organism that left these fossils behind "Dickinsonia."

But what exactly was it?

In the past, some scientists suggested it was an animal. Others believed it was a single-celled organism called a protist.

Researchers presented evidence that Dickinsonia was an animal in a recent paper. The paper appeared in the publication Science.

The most important evidence was that Dickinsonia fossils found in Russia contained carbon-bearing substances produced by animals.

Experts not connected to the study called that evidence strong. They also said most scientists who had studied the fossils already believed that Dickinsonia was probably an animal.

Douglas Erwin is with the Smithsonian Institution. He said he is sure the fossils are from an animal.

It is not clear when Dickinsonia lived. Some fossils are about 558 million years old, said Jochen Brocks of the Australian National University in Canberra. He was one of the researchers involved in the study.

Brocks considers Dickinsonia to be "the very oldest animal that we can be sure about. He added that it is about 2 million years older than another widely accepted animal fossil.

Brocks said scientists do not know much about what Dickinsonia looked like. But he said they do know it was "soft and flexible."

Dickinsonia was not the first animal on Earth. Analysis of the genetic materials of living animals suggests that animals first appeared more than 720 million years ago. But scientists have never found fossils that old.

carbon – n. a chemical element that is found in all living animals and plants.

analysis - n. a careful study of something to learn about its parts, what they do, and how they are related to each other

bearing - n. a relation or connection