Update Required To play the media you will need to either update your browser to a recent version or update your Flash plugin.
By Gregory Stachel
01 September 2022


A new study found that math and reading test results for America's nine-year-olds greatly fell during the first two years of the COVID-19 pandemic. 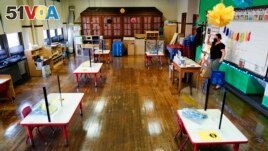 FILE - Desks are spaced apart ahead of planned in-person learning at an elementary school on March 19, 2021, in Philadelphia. (AP Photo/Matt Rourke, File)

The decreases hit all areas of the country and affected students of most races. But students of color saw some of the greatest decreases, widening the differences in test results between races.

Much of the nation's standardized testing did not happen during the early days of the pandemic. So, the findings released Thursday gave an early look at the effects the pandemic had on learning. More data is expected to be released later this year as part of the National Assessment of Educational Progress (NAEP), also known as the Nation's Report Card.

Daniel McGrath of NCES said these are some of the largest decreases they have observed in a single testing period in 50 years. McGrath added, "Students in 2022 are performing at a level last seen two decades ago."

The study shows the difficulties in education as U.S. schools shut down for months at a time during the pandemic. Many students spent a year or more learning from home. And virus outbreaks among school workers and students continued to interfere with learning as students returned to the classroom.

More difficulties for students of color

Across the U.S., all areas saw decreases in math. But decreases were a little worse in the Northeast and Midwest compared with the West and South. Outcomes were similar for reading, except that the West had no measurable difference compared with 2020.

Although the results mark a sharp drop since the pandemic, the study found that the average reading and math scores are still higher than the ones from the 1970s.

standardize – v. to change (things) so that they are similar and consistent and agree with rules about what is proper and acceptable

score – n. the number of points that someone gets for correct answers on a test or exam