Update Required To play the media you will need to either update your browser to a recent version or update your Flash plugin.
By John Russell
06 March 2020


Red pandas are native to the high forests of Asia. They are only a little bigger than a house cat and considered to be endangered.

Scientists reported last month that not all red pandas belong to the same species. There are two different species of this animal, not just one, a study found.

The scientists reported finding major differences in three genetic markers between Chinese red pandas and Himalayan red pandas. Scientists identified the markers after studying DNA from 65 of the creatures. DNA carries genetic information for the development, growth and reproduction of living things. 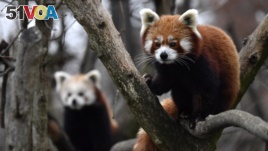 Conservation biologists Yibo Hu and Fuwen Wei led the study. Their findings were published in the journal Science Advances.

"To conserve the genetic uniqueness of the two species, we should avoid their interbreeding in captivity," Hu said. "Interbreeding between species may harm the genetic adaptations already established for their local habitat environment."

Scientists had earlier suggested there were two species of red panda. But the new study was the first to provide the genetic information necessary to permit such a judgment.

International experts estimate a total population of around 10,000 red pandas in the wild. The two species differ in coloration and skull shape. The Himalayan red panda is the rarer of the two.

Major threats to red pandas include deforestation and habitat loss.

Red pandas are sometimes called living fossils because they have no close living relatives. They are the only remaining member of their mammalian family.*

*The family is called ‘Ailuridae'

Will Dunham reported on this story for Reuters. John Russell adapted it for VOA Learning English. George Grow was the editor.

species – n. a group of individuals who have common qualities

conservation – n. the protection of animals, plants, and natural resources — often used before another noun

uniqueness – n. the quality or state of something being unlike anything or anyone else

interbreed – v. to cause animals of two different species to produce young animals that are a mixture of the two species

skull – n. the bones of the head