Update Required To play the media you will need to either update your browser to a recent version or update your Flash plugin.
By VOA
27 November, 2013

A new study finds a lack of education for young children in developing nations seriously affects the country's economic progress. The organization Results for Development called R4D performed the study. The Non-Governmental group is based in Washington D.C. Its study says children who are not attending primary school are an unused source of economic growth for their country.

R4D says it performed the study because it was worried about a growing worldwide problem in education. The group found 57 million children of primary school age are not in school, most of them are from sub-Saharan Africa and Southeast Asia.

Milan Thomas works for R4D. He says there has been progress in reducing the number of children who do not attend school, but he says that progress has slowed in recent years. He says there is no disagreement that children with basic education can look forward to a better life. 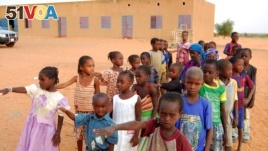 FILE - Children get ready to enter a class room in Yakouta, Burkina Faso.

"The benefits associated with primary education are really undisputed at this point because there are countless studies showing that children who complete basic education tend to enjoy better health and higher incomes over their lifetimes," said Thomas.

But he says even though the value of education is known, it is important to find new ways of proving that value. So the organization led its work with the question, "what is the estimated cost to a nation's economy of its out–of-school children? "

The study uses information from the UNESCO Institute for Statistics, as well as studies of developing labor markets. The results estimate the losses suffered by 20 developing countries if more young children can not get basic education. Milan Thomas says the study also considered earnings the children not attending primary school would never receive.

He says the research found that it is far more costly in sub-Saharan Africa to have primary school age children out of school than to educate them. He notes the cost to provide all children with primary education is much less than the average cost of not providing the schooling. He says the cost of educating children is more than the value of a full year's average economic growth for five countries in the study: they are Ivory Coast, Gambia, Mali, Senegal and Yemen.

Mr Thomas says the cost of children being out-of-school in Senegal is nearly 8 percent of the country's total goods and services. He said Nigeria has the highest number of out-of-school children — 10 million. He said that will cost the country billions of dollars.

He says he hopes the study will prove to local governments and policy makers the value of a basic education for all children. And he says he hopes it will move them to provide that education to primary school age children in their country.