Update Required To play the media you will need to either update your browser to a recent version or update your Flash plugin.
By Bryan Lynn
08 August 2021


A new study suggests that rough areas on the moon's surface block sunlight and permit water ice to form across wide areas.

The U.S. space agency NASA already confirmed last year that results from two studies suggested water ice likely existed across much of the moon's surface, even during daytime.

One of those studies centered on so-called "cold traps" observed on the moon that hold frozen water. These areas exist in a state of permanent darkness because temperatures are below about minus 160 degrees Celsius.

Until now, scientists have not been sure what was permitting these traps to exist. Especially since the moon does not have a thick atmosphere to help water survive. One theory was that water molecules could be trapped on the lunar surface inside rock or other material that resulted from meteorite strikes.

But a new study by NASA researchers provides another possible explanation for how water ice could remain in many areas of the moon's surface. It presents evidence that the rough, rocky surface creates shadows that permit water ice to survive.

The researchers note that past observations suggested there were movements of water through the lunar day. A lunar day is the time it takes for one point on the Earth to make one complete rotation and end up at the same point in relation to the moon.

Studies have provided evidence that the amount of water decreased on the moon's surface when sunlight was brightest and increased with less sunlight.

The latest study was led by Bj&#246;rn Davidsson, a scientist at NASA's Jet Propulsion Laboratory (JPL) in California. He teamed up with another JPL researcher, Sona Hosseini, to carry out the research. 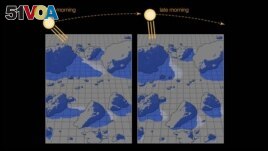 This illustration shows an area of the moon's surface where shadows may enable water ice to survive on the sunlit lunar surface. When shadows move as the Sun tracks overhead, the exposed frost lingers long enough to be identified by spacecraft. (NASA)

The team revised past computer modeling to include rough surface areas of the moon that can be seen in images collected from NASA's Apollo missions from 1969 to 1972. The research results recently appeared in the publication Monthly Notices of the Royal Astronomical Society.

The study suggests that as surface frost that forms in cold areas receives sunlight, it can then be "cycled into the moon's exosphere." The exosphere is the thin, outer area that forms around a planet or satellite object, such as the moon.

"Frost is far more mobile than trapped water," Davidsson said in a statement. "Therefore, this model provides a new mechanism that explains how water moves between the lunar surface and the thin lunar atmosphere."

The researchers say their study is the first to examine how shadows on the lunar surface can affect the ability of water molecules to survive as frost during the daytime.

They noted that such research is important to help scientists better understand how water enters and leaves the moon's exosphere.

Hosseini said understanding water as a resource is "essential" for future NASA missions or any possible private space exploration. She added if water ice is available in sunlit areas of the moon, future explorers could use it for fuel and drinking water.

"But first, we need to figure out how the exosphere and surface interact and what role that plays in the cycle," Hosseini said.

The researchers say they plan to test their theory by leading a team to develop small sensors to measure signals given off by a molecule contained in water ice. The sensing device will be designed to be used on small landers or robotic explorers that could be sent to the moon in future missions.

Bryan Lynn wrote this report for VOA Learning English, based on reports from NASA and Monthly Notices of the Royal Astronomical Society. Hai Do was the editor.

revise – v. change something that has already been worked on

frost – n. a thin layer of ice that forms on surfaces, especially at night when it is cold

mobile – adj. able to move or be moved easily

mechanism – n. a part of a piece of equipment that does a particular job

figure out – v. to understand or find something, such as a reason or a solution by thinking