Study: Cutting Out One Sugary Drink is Good for Your Health

Update Required To play the media you will need to either update your browser to a recent version or update your Flash plugin.
By Christopher Jones-Cruise
18 August, 2016


A new study shows that replacing one sugary drink a day with water can help a person lose weight and improve their health.

Kiyah J. Duffey helped to write a report on the study. She says no matter how many sugar-sweetened beverages someone drinks, "replacing even just one serving can be of benefit."

Duffy is a specialist on human nutrition, foods and exercise. She teaches at the College of Agriculture and Life Sciences at Virginia Tech University in Blacksburg.

Medical experts believe sugary drinks are partly to blame for the obesity epidemic in some areas. The drinks have also been linked to Type 2 diabetes and heart disease. 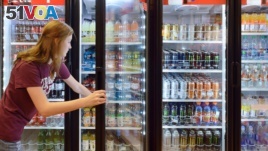 Swapping out water for one sugary drink per day can improve health according to a new study. (VA Tech)

The U.S. government's 2015 Dietary Guidelines for Americans says no more than 10 percent of a person's daily calories should come from sugary drinks.

Duffy says just replacing one 236-milliliter sugary drink with the same amount of water would help people reach that target.

"We found that among (American) adults who (drink) one serving of sugar-sweetened beverages per day, replacing that drink with water lowered the percent of calories coming from drinks from 17 to 11," she said. "Even those who consumed more sugary drinks per day could still benefit from water replacement, dropping the amount of calories coming from beverages to less than 25 percent of their daily caloric intake she said."

The report was published in the journal Nutrients.

VOANews reported on this story. Christopher Jones-Cruise adapted the report for Learning English. George Grow was the editor.

beverage – n. something you can drink; a liquid for drinking

serving – n. an amount of food or drink that is enough for one person

obesity – adj. very fat; fat in a way that is unhealthy

intake – n. the amount of something (such as food or drink) that is taken into your body