Update Required To play the media you will need to either update your browser to a recent version or update your Flash plugin.
By John Smith
06 March, 2017


A new study shows that improving housing conditions may help in the fight against malaria at a time when other efforts be may slowing.

The World Health Organization reports that more than 400,000 people died of malaria in 2015. Most of them were children in Africa.

Study organizers note that African countries south of the Saharan desert are developing faster than many in other areas. They think architects and city planners can help in the fight against the disease. 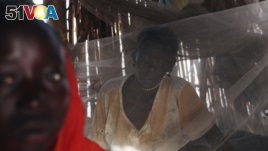 FILE - A Sudanese woman suffering from malaria sits inside her makeshift house in Golo, Fashoda county in Upper Nile State May 29, 2014.

Insecticide products have been extremely effective in limiting the spread of malaria. They have chemicals that target mosquitoes -- the insects that pass the disease to humans.

Insecticide-treated bed nets and use of the products inside buildings have helped reduce malaria death rates by 40 percent since 2000. But experts say mosquitoes are becoming resistant to insecticides and new tools are needed to fight the disease.

Lucy Tusting of the University of Oxford is an expert on the spread and control of disease. She says public health experts should use the move away from traditional mud-and-thatch homes to help fight malaria.

"We do have an opportunity to tap into the changes that are ongoing in many parts of Africa in order to build healthier housing."

Tusting and other researchers wondered if the change in housing they had noticed could help in the fight.

"What we're seeing in many parts of Africa is a subtle transition from more traditional housing -- which might have thatched roofs and mud walls -- towards metal, tiled-roof housing with concrete walls."

That should help because the mosquitoes mostly bite people in and around their home at night. Better design of homes, with fewer holes in the walls, could help keep the insects out. But until recently there has not been much research on the subject.

Tusting and her team examined health and population surveys from 21 countries. They found that children living in modern buildings were 9-to-14 percent less likely to have malaria than those who lived in traditional housing. That is about the same level of protection given by insecticide-treated bed nets.

"What this suggests is that housing could be an important tool in tackling malaria."

This is not a new idea. Tusting notes that screened windows and doors were the first effective method used in the fight against malaria in the early 20th century.

She says a lot of new housing will be built in Africa over the next several years. She believes those changes can be used to help further reduce malaria infections and deaths.

"We can leverage those changes. But to do so, it's important that health specialists reach beyond the health sector and work closely with architects, urban policy makers and national governments."

She says malaria prevention should become an important part of planning as African cities continue to grow.

bed net – n. a device that is used for catching or holding things or for keeping things out of a space and that is made of pieces of string, rope, wire, etc., woven together with spaces in between and is used to cover a bed while someone sleeps so mosquitoes do not bite them

thatch – adj. dried plant material (such as straw or leaves) that is used to make the roof of a building

subtle – adj. hard to notice or see; not obvious; slow

screened – adj. covered by a sheet that is made of very small wire or plastic strings which are woven together and that is set in a frame in a window, door, etc., to let air in but keep insects out