Update Required To play the media you will need to either update your browser to a recent version or update your Flash plugin.
By Christopher Cruise
11 September, 2014


A study by researchers at Oxford University has found that playing video games can be good for children. The study found that children and teenagers who play the games for less than an hour a day show good behaviors in school and life.

The researchers asked almost 5,000 people between the ages of 10 and 15 in Britain how much time they spent playing video games. They also asked them how happy they were and whether they have good relations with their friends and other students.

The researchers found that young people who spend less than one-third of their time away from school playing video games had the highest levels of happiness. The researchers compared them to two other groups: those who didn't play games at all and those who spent three hours or more a day playing them.

The study was published in the journal Pediatrics. It suggests that the influence on a child's life of video games -- whether good or bad -- was not nearly as great as the effect of family members, friendships or poverty. 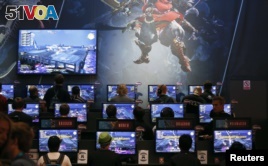 Visitors play the "Final Fantasy XIV: A Realm Reborn" video game at an exhibition stand during the Gamescom 2014 fair in Cologne August 13, 2014.

Another study on the effect of video games was performed by researchers at Dartmouth College in 2012. It was published in the Journal of Personality and Social Psychology. The researchers say they found that teenagers who play violent video games that give rewards for taking risk are more likely to take high risks in their lives. Previous studies have linked these games to increased aggressiveness in young teens. This study, however, is the first to show that video games do more than increase aggression. It links some games to the use by teens of alcohol and illegal drugs, to risky driving and unsafe sexual behaviors.

The study lasted four years. Researchers asked more than 5,000 American teenagers questions about their experiences with games that have aggressive characters. Among those games is Grand Theft Auto. The researchers found that playing these kinds of games appeared to affect how the teens thought of themselves. They said the games appeared to make the teenagers rebel, and take part in possibly dangerous activities.

relations - n. understandings or ties between nations; members of the same family; people connected by marriage or family ties

compare - v. to examine what is different or similar

effect - n. the result or change caused by something ("The storm had a serious effect on the economy.")

violent/violence - n. the use of force to cause injury, death or damage

aggressive/aggression - n. an attack against a person or country; the violation of a country's borders