Update Required To play the media you will need to either update your browser to a recent version or update your Flash plugin.
By Bryan Lynn
02 May 2022


British researchers say they have documented a case of a patient who had COVID-19 for 505 days. Experts say they think the case represents the longest infection of COVID-19 on record.

The research was part of a study that looked at whether virus mutations can form in people who carry COVID-19 for a very long time.

The study involved nine patients who tested positive for the virus for at least eight weeks. All patients had weakened immune systems linked to organ replacement operations, HIV, cancer or other diseases. 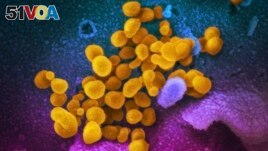 This undated, colorized electron microscope image made available by the U.S. National Institutes of Health in February 2020 shows SARS-CoV-2, indicated in yellow, emerging from the surface of cells, indicated in blue/pink, cultured in the lab. (NIAID-RML via AP, File)

Repeated tests showed that the patients' infections lasted an average of 73 days. Two of them had the virus longer than a year. Before the study, the longest-known COVID-19 case was believed to have lasted 335 days.

Dr. Luke Blagdon Snell helped lead the study. He told The Associated Press the researchers considered the cases studied to be "persistent" COVID-19. This is different from what has been described as "long COVID-19."

With long COVID-19, it is believed that the virus has been cleared from the patient's body, but individuals can still experience signs, or symptoms, of disease, Snell said. A persistent infection "represents ongoing, active replication of the virus," he added.

Each time researchers tested patients, they examined the genetic code of the virus to make sure it was the same version, or variant. Results from the study showed that the virus could change and mutate over time.

Snell said the observed mutations were similar to ones that later showed up in widespread variants of COVID-19. But the team noted that none of the new mutations in the nine cases became variants of concern. There was also no evidence that any of the patients had spread the virus to others.

Five of the nine patients studied survived. Two got rid of the infection without treatment. Two cleared the infection after treatment and one still has COVID-19.

The person with the longest known infection tested positive in early 2020, and was treated with the drug remdesivir and died in 2021.

The study team refused to name the exact cause of the patient's death. The researchers said the patient had other diseases, along with COVID-19.

Scientists hope to develop treatments to help people recover from persistent COVID-19 infections. "We do need to be mindful that there are some people who are more susceptible to these problems like persistent infection and severe disease," Snell said.

mutate – n. to cause (a gene) to change and create an unusual characteristic in a plant or animal

persistent – adj. something that continues for a long time or is difficult to get rid of

replicate – v. to make or do something again in exactly the same way

code – n. the instructions in a gene that tell the cell how to make a specific protein

susceptible – adj. easily influenced or harmed by something