Update Required To play the media you will need to either update your browser to a recent version or update your Flash plugin.
By Susan Shand
10 October, 2017

Sadeak moved west to the American state of Michigan. He told VOA that Michigan gave him the chance to hold a job while going to school.

In 2007, he opened his own retail store in Hamtramck, Michigan -- a town with many immigrants from Bangladesh. The store, specializing in cloth, is next to Bengali restaurants and food stores. His business has grown over the years.

This past summer, new and established stores were replacing empty spaces along Conant Street, the main commercial street in Hamtramck. 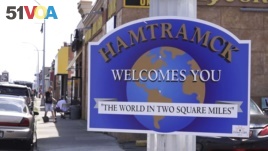 The city of Hamtramck, Michigan, surrounded by Detroit, is home to many immigrant neighborhoods, including Banglatown.

Sadeak told VOA "Back in 2000, you used to see one car in two minutes. Now we have thousands of cars driving on the streets. All the immigrants came into this town and rebuilt the whole thing," he said.

In old industrial areas across the United States, immigration is the basis for economic growth, says Steve Tobocman, Executive Director of Global Detroit. His nonprofit group works to bring international investment and business to southeast Michigan.

Tobocman told VOA that the immigration issues are real and important to the community.

"They have a real impact on family budgets, and jobs, and incomes," he said.

New research shows that after the 2008 Great Recession, a growth in Detroit's immigrant population helped to fight population decline and energize the economy. Global Detroit reported the findings.

Tobocman said that since the beginning of Donald Trump's presidency, anti-immigrant language and policies have been costly for Michigan.

"We have done some damage to America's brand as the world's most welcoming economy, most innovative economy, and a place where anybody can come and contribute to our growth and prosperity and live the American Dream," he said.

Trump's top advisor for policy, Stephen Miller, told reporters in August that the president's policies will prevent an increase in low-wage labor and protect American workers.

Miller believes that unskilled immigrants hurt the economy, and are partly to blame for unemployment in the country.

The U.S. Labor Department reported in early September that the jobless rate was 4.4 percent.

Comparing Michigan with nine other industrial states, Global Detroit estimated the economic loss that resulted from decreases in international travel and international students. The study also considered effects from Trump's cancellation of the Deferred Action for Childhood Arrivals (DACA) program and losses in agricultural production.

The group predicted a combined $1.157 billion in yearly losses in statewide economic activity. It estimated $418 million of that amount coming from the announced cancellation of DACA.

About $261 million in losses were tied to an estimated 16 percent drop in foreign visitors to the United States.

In areas of the U.S. where population is falling, immigrants are "part of what is keeping those communities vibrant and growing," says Kim Rueben, a Senior Fellow at the Urban Institute.

Rueben was a member of the National Academy of Sciences panel that wrote a report on the effect of immigration on American workers and economic growth. The group reported its findings in 2016.

Rueben noted that there are costs to state and local governments, such as educating the children of immigrants. But, she said, those same children become adults who "end up paying the most in taxes and using the least in services."

Any decision to cut immigration numbers and the overturning of DACA will hurt the economy, Reuben said.

She noted that the children of lower-wage, first generation immigrants have shown an ability to exceed education level expectations.

Ramon Taylor reported this story for VOANews. Susan Shand adapted his report for Learning English. George Grow was the editor.

retail - n. the business of selling things directly to customers

income – n. a gain, usually measured in terms of money

retail – adj. selling products directly to buyers for their own use

decline - v. to become lower in amount or less in number

prosperity - n. being successful usually by making a lot of money

vibrant - adj. having or showing great life, activity, and energy

exceed – v. to be greater than