Update Required To play the media you will need to either update your browser to a recent version or update your Flash plugin.
By Bryan Lynn
21 February 2022

The lower bodies of the three patients were left paralyzed after they suffered spinal cord injuries. But a device implanted in the spinal cord was able to send electrical signals to the muscles to permit them to stand, walk and exercise.

The device is designed to copy an action of the brain, in which it sends signals to the spinal cord that result in muscle movement. When the spinal cord receives the brain signals, it stimulates a collection of nerve cells that can activate different muscles. 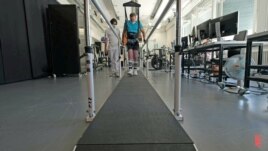 A 42-year-old patient performs training on a weight-supporting robot at Lausanne University Hospital after having received a spinal cord implant, in this undated handout photo taken in Lausanne, Switzerland. (NeuroRestore/Jimmy Ravier/Handout via REUTERS

In patients with serious spinal cord injuries, messages from the brain have difficulty reaching the nerves. But scientists have discovered that neurons – which receive and send signals for muscle movements – often still work in injured patients.

Past research into spinal cord injuries has centered on the use of electrical devices to stimulate neurons, the publication Nature reports.

Grégoire Courtine and Jocelyne Bloch of the Swiss Federal Institute of Technology in Lausanne led the latest experiments. The results were published in a study in Nature Medicine.

The experiments involved three men who had been injured in motor bike accidents. The patients ages were 29-, 32- and 41-years-old. Their injuries were to an area called the thoracic spine, which is below the neck and above the lowest part of the back.

The researchers reported that all three patients who got the spinal cord implants were able to take their first steps within an hour after receiving them.

Over the next six months, the patients regained the ability to take part in more advanced walking activities, the study found. They were also able to ride bicycles and swim in community settings. The individuals can control the nerve-stimulation devices themselves by using a personal electronic device, the researchers said.

Michel Roccati, from Italy, is one of the patients. He told reporters that the first step he took while using the device was "a very emotional experience." Roccati added that he can now stand for several hours and walk nearly a kilometer.

Other researchers have attempted to help paralyzed patients walk by stimulating nerves through the back of the spine. But the Federal Institute of Technology's Courtine told Reuters that his team redesigned the devices so signals would enter the spine from the sides. This method permits more direct targeting and activation of spinal cord areas, he said.

The team then developed artificial intelligence (AI) systems linked to the device. The AI controls electrodes on the device to send signals to stimulate individual nerves that control muscles needed for walking and other activities.

When the device was implanted, patients could "immediately activate their legs and step," said researcher Jocelyne Bloch.

However, because the patients' muscles were weak from not being used, they needed help with supporting their weight, the researchers said. It also took some time for them to learn to work with the technology.

Even though the patients have the ability to perform several kinds of activities, the team said they did not regain completely natural movements. Still, Bloch said, "The more they train, the more they start lifting their muscles, the more fluid it becomes."

Roccati said he activates the implant daily at home and continues to get stronger. "I see the improvement every day," he said, adding, "I feel better when I use it."

paralyzed – adj. unable to move part of the body such as arms or legs

implant – v. to place something into someone's body in a medical operation

stimulate – v. to make something happen or develop more

electrode – n. a conductor through which electricity enters or leaves an object, substance or region