Update Required To play the media you will need to either update your browser to a recent version or update your Flash plugin.
By Bryan Lynn
18 December 2022


New research shows that the Tonga volcano sent large amounts of particles and water vapor into the upper reaches of Earth's atmosphere.

Scientists used satellite equipment to measure the plume created by the Hunga Tonga Hunga Ha'apai undersea volcano. The blast, or eruption, of the volcano happened in January in the South Pacific near the island nation of Tonga.

The 10-minute eruption caused a series of large ocean waves, known as a tsunami, to hit areas around the world. The huge plume the volcano created included smoke, gas and water vapor. 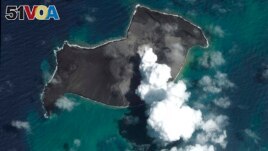 Researchers at Britain's University of Oxford studied the size of the plume and examined data showing how high it reached into the sky. They reported in a recent study in the publication Science the volcano produced the highest-ever reported plume.

The plume was the first to have broken through to the "mesosphere" level, or layer, of Earth's atmosphere, the scientists said.

The mesosphere is the third-highest layer of Earth's atmosphere above the stratosphere and the troposphere, which starts at the Earth's surface. The mesosphere rises to 85 kilometers high. Meteors burn up within this layer.

The Oxford scientists said images captured by satellites suggested the volcano's plume reached 57 kilometers into the sky. They said the previous record holder was Mount Pinatubo, which erupted in 1991. That volcano created a plume recorded as high as 40 kilometers.

Proud added that the only other volcanic plume that might have reached the mesosphere might have been released in the eruption in 1883 of Krakatau, a small volcanic island in Indonesia. "But we didn't see that in enough detail to confirm," he said.

The researchers said progress in observational technology helped them reach their findings. The team used a method known as the "parallax effect" to measure the volcano's plume.

The parallax effect describes a difference in the apparent position of an object when it is seen along two different lines of sight. The scientists said they used the parallax effect to examine the images captured from above by satellites.

Proud said his team was helped by satellites that recorded images every 10 minutes after the eruption, permitting them to document quick changes in the plume's movements.

"Thirty years ago, when Pinatubo erupted, our satellites were nowhere near as good as they are now," he said. "They could only scan the earth every 30 minutes. Or maybe even every hour."

In a separate study, NASA researchers reported in August that the Tonga volcano also blasted a huge amount of water vapor into Earth's atmosphere.

The space agency researchers said the vapor reached into the stratosphere, which stretches 50 kilometers high. But the amount of water vapor blasted into the atmosphere would have been enough to fill more than 58,000 Olympic-sized swimming pools.

"We've never seen anything like it," said Luis Millán, an atmospheric scientist at NASA's Jet Propulsion Laboratory in California.

The NASA study, published in Geophysical Research Letters, estimated the plume injected an amount of vapor equal to about 10 percent of the water that already existed in the stratosphere. That was nearly four times the amount of water vapor scientists estimate the Mount Pinatubo eruption sent into the stratosphere, the researchers said.

NASA said the large amount of water vapor could have been enough to temporarily affect Earth's average temperature. This is because water vapor traps heat. However, the team noted that this effect would disappear over time when the extra water vapor "cycles out" of the stratosphere. This means the presence of the water vapor would not be enough to greatly affect climate change.

Bryan Lynn wrote this story for VOA Learning English, based on reports from NASA and Oxford University.

vapor – n. small drops of liquid that exist in the air

plume – n. a tall, thin amount of dust and smoke that rises into the air

meteor – n. a rock from outer space that becomes very hot and burns brightly in the sky as it enters Earth's atmosphere

scan – v. to use a machine to examine objects