A new kind of foreign fighter is on the move.

These individuals are arriving by the thousands in areas where conflicts are taking place. They are either looking for new experiences or hope to fight for their cause. And they are getting the attention of intelligence officials in the United States and other countries.

These foreign fighters are not jihadists hoping to join the self-declared Islamic State group or al-Qaida. 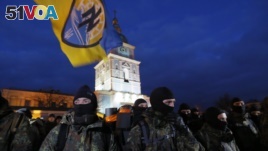 Volunteers line up to take an oath of allegiance to Ukraine, before they are sent to the eastern part of Ukraine to join the ranks of special battalion "Azov", in Kiev, Ukraine, Saturday, Jan. 3, 2015.

They are political extremists and white supremacists. They are traveling to Ukraine in large numbers. In fact, the numbers are similar to those of the movement of fighters to Syria early in that conflict.

A new report says that more than 17,000 people from 50 countries -- including the United States -- have traveled to Ukraine in recent years. It said they have gone there to join both the forces loyal to Ukraine's central government and pro-Russian forces.

The report comes from The Soufan Center, a U.S.-based nonprofit research group.

Of the 15,000 fighters who came from Russia, most have returned home, the group says. But the 2,200 who stayed, it warned, should be watched.

Jason Blazakis works as a researcher at The Soufan Center and is a professor at the Middlebury Institute of International Studies.

Blazakis said most "of those foreign fighters are coming from the near region" He noted there are 800 fighters from Belarus and hundreds more coming from Germany, Georgia, Serbia and other European countries.

"That is in some ways, not too different than what you saw with ISIS," Blazakis said.

In early 2015, the London-based International Center for the Study of Radicalisation reported that almost 21,000 people from 50 countries had gone to fight in the Syrian civil war. More than half of those individuals were from the Middle East and North Africa.

"White supremacy extremism is a transnational challenge," the Soufan Center warned. The study found white supremacy attracts from Australia to Ukraine, and Norway to New Zealand.

"White supremacists are forming global networks, much as jihadis did" before the 2001 attacks against the United States, the report said.

Many of these fighters want to join the Azov Battalion, a pro-Ukrainian force that experts claim supports the teachings of Germany's former Nazi party. They say the force targets white supremacist groups around the world for new members.

Russia and rise of far-right

"The rise of white supremacy in Western society and far right groups in Europe has been part of a disinformation campaign by the Russian government to contribute directly to that rise," said Ali Soufan. He is the founder of The Soufan Center and once worked for the U.S. Federal Bureau of Investigation.

The Russians want "to create divisiveness in Western societies," he said. "And they don't care if it's white supremacist, if it's other groups. They do whatever and they see what works."

Western officials worry it has been working well enough.

In Europe, intelligence officials see Russia building on relationships it has developed with far-right or nationalist parties. Some of these parties have moved from being small groups to major political players.

This past July, officials in Italy seized guns, bullets and air-to-air missiles, as well as Nazi materials, during an investigation into Italians who had fought in Ukraine.

Other European countries are also worried.

Kacper Rekawek is head of the national security program at GLOBSEC, a Slovakian-based research center. He believes that the flow of white supremacist foreign fighters to Ukraine is just the beginning.

"There is a network," he said in a video.

Just like the organizations that sent jihadists to Syria and Iraq, it is giving those who travel common cause.

Rekawek worries the violence may be able to spread more quickly.

"Now the question is whether they take the fight from Ukraine to Europe."

white supremacist – n. a person who believes that the white race is better than other races

region – n. a part of an area, state or country that is different or separate from other parts in some way