Update Required To play the media you will need to either update your browser to a recent version or update your Flash plugin.
By Gregory Stachel
08 August 2022


New research published last week in the publication Communications Biology suggests the world's wildlife may be in more trouble than scientists have so far reported.

Scientists have examined the status of more than 147,000 plants and animals. But there are thousands of species that scientists still do not know enough about to judge their health and safety. As a result, those species have not been included in the listing of threatened or endangered species. The International Union for the Conservation of Nature (IUCN) updates that list each year.

Among those underexamined species is the orca whale, the fairy armadillo of Argentina, and 200 bat species around the world. 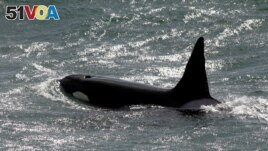 FILE - An orca, or killer whale, speeds towards the coast before throwing itself onto the sand to hunt baby sea lions in Argentina's Patagonian area of Punta Norte on March 21, 2008. (REUTERS/Enrique Marcarian)

In some cases, the lack of data itself is a warning sign. It suggests the species may be hard to find because its population has decreased, said a team of international scientists. They used data on environmental conditions and human threats to map the possibility of species death among those they examined.

Then, the team looked at the 7,699 underexamined species. They estimated that about 56 percent were facing conditions that likely put the species at risk of dying out, or extinction, said the study.

The IUCN lists about 28 percent of species around the world as "threatened."

There are millions more plant and animal species that the IUCN has never looked at. Scientists estimate 1 million of them are threatened with extinction, said a 2019 report by the U.N.'s Intergovernmental Science-Policy Platform on Biodiversity and Ecosystem Services.

Jan Borgelt is a writer of the report and an ecologist at the Norwegian University of Science and Technology. He said of the endangered and threatened "data deficient" plants and animals, many are species that live in small areas far from human population centers. He added many are in central Africa, Madagascar, and southern Asia.

The state of nature "could be worse than we realize if these predictions are true," he said.

The study said the worst off are likely an underexamined kind of animal called amphibians, with 85 percent estimated to be threatened.

Governments often aim to protect species named by the IUCN as threatened or endangered.

Pamela Gonzalez del Pliego is an ecologist at the University of évora in Portugal who was not involved in the research. She said, studies such as this "highlight where conservation resources should be allocated."

deficient – adj. not having enough of something that is important or necessary

allocate – v. to divide and give out (something) for a special reason or to particular people or companies