Update Required To play the media you will need to either update your browser to a recent version or update your Flash plugin.
By Dan Novak
05 April 2022


Young people all over the world are seriously concerned about the state of politics and education. That information comes from a survey by the Organization for Economic Cooperation and Development, or OECD.

The study looked at 151 youth organizations from 72 countries. It centered on young people aged 15 to 29.

The researchers noted that people between those ages have lived through two worldwide crises — the 2008 financial collapse and the coronavirus pandemic. OECD researchers say it is important to learn the effects of the pandemic on younger people. The pandemic, they said, has "affected different age groups differently and...its repercussions will be felt by many for decades to come..." 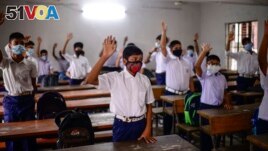 FILE - Students attend a class at the Narinda Government High School as schools reopen after being closed for nearly 18 months due to the coronavirus pandemic in Dhaka, Bangladesh, Sept. 12, 2021.

Youth organizations were asked to identify three areas in which young people were finding it most difficult to deal with the effects of COVID-19. The top answers were mental health, education and employment. Other areas of concern were personal relationships, personal wealth and limits on individual freedom.

The researchers said the pandemic's long-term effects on education "remain to be fully observed." The study added that the crisis has greatly "reduced international student mobility," widened educational differences across different populations and increased the risk of students ending their education.

An OECD study released this year found that, on average, 6 percent of 15- to 19-year-olds in OECD countries were not involved in employment, education or job training in 2020.

In poorer countries like Colombia and Brazil, at least 20 percent of young people were not involved in employment, education or training.

Several countries have increased educational spending and sought to improve the lives of vulnerable groups.

Sweden extended the time for which young immigrants studying in upper secondary education must find a job after graduation from 6 to 12 months. There, immigrants are required to have a job upon graduation to get residency.

France, Belgium and Estonia have started new programs and trainings for young people out of education and the workforce to build new skills. Overall, just three out of 32 OECD member countries studied by the researchers — Iceland, Japan and Luxembourg — did not target young people as part of their recovery plans.

Even with such efforts, young people's trust in government has decreased since the pandemic started. Of all countries taking part in the study, 37 percent of youth organizations say their trust in government has decreased. They also reported low levels of approval for government services like healthcare, housing and education. Thirty-four percent of youth organizations surveyed also say they are less satisfied with democracy.

Many countries looked to build trust with young people by partnering with youth organizations in planning recovery measures. Australia invited youth organizations to comment on the government's budget goals. Estonia listed the National Youth Council as an important partner in the creation of its recovery plan. Mexico questioned 20,000 of its young citizens on issues like education, employment, health and violence to inform policy measures.

When "governments communicate proactively," the researchers said, "they can generate citizen buy-in and engagement, including among young people."

repercussion — n. something usually bad or unpleasant that happens as a result of an action, statement, etc., and that usually affects people for a long time

mobility — n. the ability or tendency to move from one position or situation to another usually better one

disadvantage — n. something that makes someone or something worse or less likely to succeed than others

circumstance — n. a condition or fact that affects a situation

proactive — adj. controlling a situation by making things happen or by preparing for possible future problems

engagement — n. the act or state of being involved with something